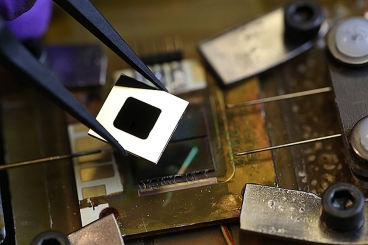 A new approach to harvesting solar energy, developed by MIT researchers, could improve efficiency by using sunlight to heat a high-temperature material whose infrared radiation would then be collected by a conventional photovoltaic cell.

This technique could also make it easier to store the energy for later use, the researchers say.

In this case, adding the extra step improves performance, because it makes it possible to take advantage of wavelengths of light that ordinarily go to waste. The process is described in a paper published this week in the journal Nature Nanotechnology, written by graduate student Andrej Lenert, associate professor of mechanical engineering Evelyn Wang, physics professor Marin Solja?i?, principal research scientist Ivan Celanovi?, and three others.

A conventional silicon-based solar cell “doesn’t take advantage of all the photons,” Wang explains. That’s because converting the energy of a photon into electricity requires that the photon’s energy level match that of a characteristic of the photovoltaic (PV) material called a bandgap. Silicon’s bandgap responds to many wavelengths of light, but misses many others.

To address that limitation, the team inserted a two-layer absorber-emitter device