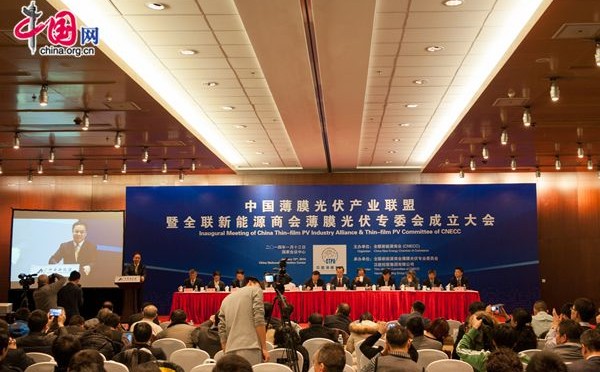 More than 100 thin-film photovoltaic (PV) manufacturers in China on Monday, Jan. 13, formed an industrial alliance in a bid to boost the sector’s collective competitiveness, especially when rivaling with traditional energy and other solar energy sectors such as crystalline silicon PV.

Thin-film PV presents a more advanced technology, the advantage of which lies in its enhanced flexibility, increased translucency and reduced weight of solar panels. Industrial insiders have on multiple occasions reiterated this is in fact the future of PV, also taking into account the transition — from crystalline silicon to thin-film — already taking place in several Western countries.

However, thin-film PV products are still bottlenecked by their lower conversion rate, around 10 to 12 percent on average, making them less desirable when competing with crystalline silicon’s more than 20 percent.

Hanergy, a leader in the field of thin-film, has boasted its conversion rate has thus far reached 15.7 percent, meaning it is already more competitive, according to Chairman Li Hejun, who has on multiple occasions assured that “thin-film is the future of the PV industry.” Yet the overall industry would still need some time to turn their lab-found higher rates into hard cash.

PV power generation in China is still conducted in such a concentrated way, that a PV company leases a large area of deserted land, sets up solar battery panels and expects there to be sunshine every day. In this type of generation mode, the panel material’s weight or flexibility do not matter very much, which partly explains why thin-film makers still form a minority and their products are facing difficulties in edging further into the market.

“In the future, each house will be a power station. The rooftop solar cells will be able to generate enough electricity to sustain the [entire] house. People can sell the extra amount to the state power grid,” said Li, who was elected chairman of the alliance.

Li insisted at the alliance inauguration meeting that “thin-film and crystalline silicon should complement one another in the same way desktop computers are complementary with laptops and tablets.”

Li’s remark seemed to overturn his previous conclusion that thin-film would replace crystalline silicon. Perhaps the years of the industrial-wide slow development, amid the fierce competition from crystalline silicon rivals, made his “replacement” judgment either overly optimistic or somewhat premature.

PV now accounts for less than 1 percent of China’s total power generation. The average PV electricity price is 0.9 yuan (US$0.15) per kWh, compared with 0.5 yuan (US$0.08) for thermal electricity, according to Zhang Guobao, former National Energy administrator.

Zhang said the State Grid Corp., China’s nationwide electric utility company, is reluctant to buy PV electricity just because it is too expensive, though the “State Grid can receive subsidies from the national finance.”

He said PV makers should not count on the country to keep subsidizing them, but “strive to make technological innovations,” since “the government cannot forever subsidize you, and any subsidy-based development will limit itself [within the subsidy size].”

“Instead, PV makers should lower the electricity price and their module cost, so that the market will voluntarily accept it,” he said.