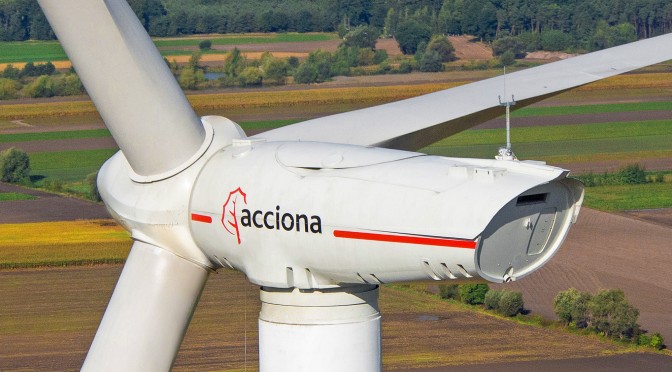 The agreement, signed with a joint venture between Voltalia, CHESF and Encalso, covers 31 wind turbines of 3 MW each – the AW 116/3000 and AW 125/3000 models – for wind farms located in North East Brazil.

In addition to the turbine supply contracts, the operation and maintenance of the wind farms has been contracted for a period of 15 years.

To date ACCIONA Windpower has supplied, or has orders for, 423 MW in Brazil, all for its most powerful model of wind turbines.

ACCIONA Windpower (AWP), a subsidiary of the ACCIONA group that designs, manufactures and sells wind turbines, has signed a contract for the supply, operation and maintenance of 93 megawatts (MW) dedicated to wind farms which are jointly owned by Voltalia, CHESF and Encalso. It is the fourth contract signed by AWP in Brazil, where it has already supplied – or has orders for – 423 MW, all with 3 MW wind turbines.

The wind farms will be equipped with thirty-one AW125/3000 and AW116/3000 turbines of 125 and 116 meters rotor diameter respectively. They have the largest swept area designed by ACCIONA Windpower and are mounted on 120-meter-high concrete towers. The agreement covers the supply and installation of the turbines in the field and the operation and maintenance of the site for a period of 15 years.

The wind farms are jointly owned by Voltalia, a renewable energy developer and producer also present in France, Greece and Guyana, CHESF, a leading power utility belonging to Eletrobras, and Encalso, a recognized construction and property development company.

ACCIONA Windpower signed a first supply contract with Voltalia for a total of 210 MW, including 90 MW for the Areia Branca wind farms and 120 MW for the Sao Miguel de Gostoso (SMG) wind farms ? also located in North East Brazil. These orders come on top of 120 MW of other orders received by ACCIONA Windpower for the Atlantica wind farm in Rio Grande do Sul, owned by the Brazilian electric power company CPFL.

“It is an important agreement, involving leading players in the wind power development that is taking place in Brazil. It confirms the competitiveness of our technology and the particular suitability of the AW3000 wind turbines, which are more powerful and have a rotor diameter more in line with the wind potential of large areas of Brazil”, says ACCIONA Windpower Director in Brazil Christiano Forman. “We are delighted to be working together with Voltalia, CHESF and Encalso in the implementation of this project, which strengthens our position in the country”.

The wind turbines covered by the contract are the AW 125/3000 IIIa ? an ideal model for low-wind sites, with a swept area of 12,305 m2 ? and the AW 116/3000 IIa for sites with moderate wind speeds, and a swept surface area of 10,568 m2. The 31 wind turbines will be mounted on 120-meter-high concrete towers, which are manufactured using an innovative construction system on site that reduces transport costs and the impact of the towers on the environment.

ACCIONA Windpower fulfils local requirements for implementation in Brazil, as defined in the Finame regulations. It has its own hub production plant, which will be complemented by a nacelle factory in the fourth trimester of 2014, both located in the state of Bahia. It obtains supplies of key components of the wind turbine such as blades and towers from local companies, in addition to other lesser components.