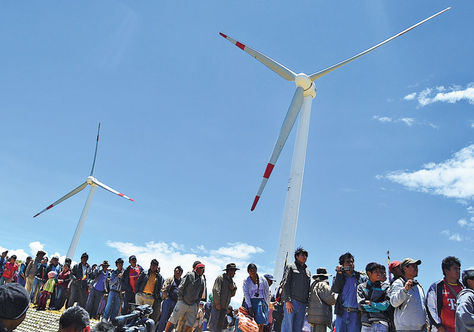 Bolivian President Evo Morales on Thursday inaugurated the first pilot wind farm in this South American country in the central department of Cochabamba.

At the inauguration of the 3-mega watt (MW) capacity wind farm built by China’s Hydrochina Corporation in Qollpana, Cochabamba, Morales said “this is a historic day, because we are delivering the Bolivian people a new wind power system, which is also a clean- energy option.”

The president praised the Chinese corporation, saying that “we greet the Chinese technicians of the company who developed the wind power system. Besides, we have to acknowledge that the company has fulfilled the schedule.”

Morales said his government will install other state-owned wind power systems in other parts of Bolivia.

The first pilot wind farm in Bolivia was built and will run by Hydrochina under the contract signed with the Bolivian government on March 9, 2013.

The energy generated by the wind farm will be part of the National Inter-Connected System (SIN) through a network from Cochabamba’s Electricity Company.