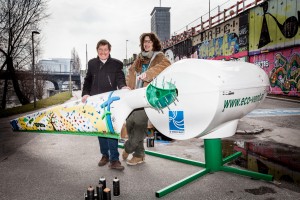 A proposal made this week to restrict new wind farms to just 2 percent of Austria’s biggest state has drawn warnings the country won’t meet its energy goals.

Under the draft law presented Monday by Lower Austria Environment and Energy Minister Stephan Pernkop, the “sprawl” of wind farms would be addressed by limiting new turbines to 85 sites mostly north and southeast of Vienna — Austria’s “wine country.”

Other zones would be allowed around Marz, Austria, in the Vienna Basin between the Eastern Alps and Carpathian Mountains, and in Austria’s central forest district, the Vienna daily Die Presse reported.

“The question now is whether the long-term goals of the northeast Energy Roadmap 2030 are still possible with this zoning,” IG Windkraft Managing Director Stefan Moidl, said in a statement lamenting the new planning program as a blow to further renewable energy development in the country.

“It is a pity that the state allowed the area with the greatest wind energy potential in Austria only to 2 percent of its land area,” he said. “So far there have been very strict rules for wind power projects through strict spacing requirements and the projected nature areas in Lower Austria. The reduction to 2 percent of the country goes far beyond that — it is a drastic restriction.”

The proposed planning framework was worked out by state legislators in conjunction with spatial planners, landscape experts, conservationists, ornithologists and tourism leaders.

They were unveiled six months after the state Parliament slapped a moratorium on new wind farms in the face of widespread objections from residents and environmentalists, who sought to control the spread of the turbines.

The actual amount of land of available could in reality be even less, given that under the draft, even potential wind farms in the designated zones would be subject to the previously the necessary environmental impact assessments.

“The objectives in the northeast Energy Roadmap 2030 will be satisfied with this regulation,” he said. “Wind power has become a mainstay of our energy supply. Lower Austria has several convenient locations and already now covers 15 percent of its electricity from wind power.

“Wind energy enjoys a high degree of acceptance in the population. But to obtain their consent and to improve security for the communities and for the country, a planning program governing the use of wind power in Lower Austria was necessary.”

With Austria having already ruled out expanding nuclear power discouraging shale gas, the minister said, the further development of wind power is a given.

“Those who have said ‘no’ to nuclear power and shale gas must say ‘yes’ to all forms of renewable energy, so it’s really about a steady and smooth reconstruction of the energy system in the best possible coordination with the people and the local community,” Pernkop said.