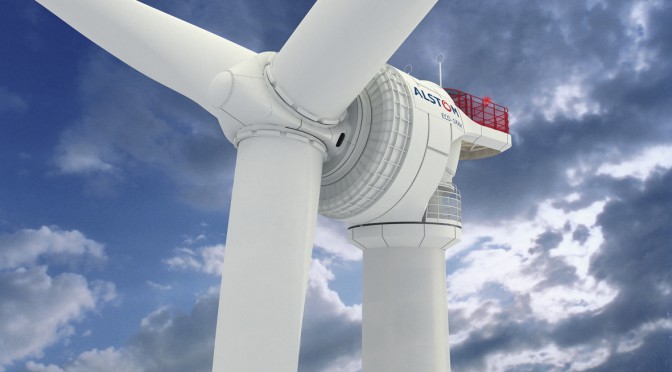 The European consortium comprising EDF Energies Nouvelles and wpd offshore, have announced that they have submitted two bids for the Tréport and Ile d’ Yeu/Ile de Noirmoutier projects. These two offers fall within the framework of the second call for tenders for French offshore wind energy projects, representing total new capacity of 1,000 MW to be installed by 2023. This could reinforce the ambitious plan already taking place with Alstom, partner for the turbines.

An additional 1,000 MW of offshore wind energy for France

In March 2013, the French government launched a call for tenders for the construction and operation of two large-scale offshore wind farms:

This national call for tenders for 1,000 MW is in addition to the first call for tenders for 2,500 MW launched in 2011, which comprised five wind energy projects off the French coast (the Channel and the Atlantic). Three of the four lots awarded by the Government were won by the consortium EMF headed by EDF Energies Nouvelles: Fécamp (498 MW), Courseulles-sur-Mer (450 MW) and Saint-Nazaire (480 MW). These projects could come into service starting from 2018.

The European consortium made up of EDF Energies Nouvelles and wpd offshore with Alstom as exclusive supplier for the turbines represents a strong alliance, demonstrated by the many years of collaboration in the projects won together during the first call for tenders.

The quality of propositions made and the accuracy of the studies conducted at the time of the first call for tenders were verified at the end of the risk assessment period. The project companies laureates of the three sites during the first call for tenders each indicated on 23 October, that the projects could continue in accordance with the initial pricing offer, technical options and timetable presented in the applications made in 2012.

The extension of this partnership for the second call for tenders will enable the different parties involved to capitalise on the operating and working methods established over the last two or more years, as well as their shared vision.

On November, 29th 2013, the consortium filed two solid, tailored and realistic offers based on the technical and environmental studies conducted over several years by renowned research engineering offices.

The consortium also benefits from the enhanced expertise of its partners.

In Germany, wpd offshore has developed the first offshore wind farm in Baltic sea (launched in 2011) and has secured the financing of the project Butendiek (80 wind turbines in North Sea and 1.3 bn investment), which construction will begin springtime 2014 under wpd’s responsibility.

Eight offshore projects in Europe are fully permitted for a total power output of 2.5 GW.

EDF Energies Nouvelles and wpd offshore worked closely with local actors. Technical and environmental studies carried out in these areas, knowledge of local actors and many meetings have been instrumental in defining these projects.

The submission of bids for these two additional projects confirms the consortium’s aim – with Alstom as manufacturer of wind turbines – to build up and consolidate an ambitious industrial plan ensuring a long-term future for Alstom’s wind offshore plants. This new capacity could provide opportunities to promote its export activities.

The implementation of the industrial plan is expected to create 5,000 jobs including 1,000 direct. As part of the plan, Alstom has begun building four plants to manufacture various key components of the wind turbines. The two Saint-Nazaire plants which will produce the nacelles and the generators have been under construction since spring 2013 and are due to be completed in late 2014. Building permit application for the blades and tower factories in Cherbourg will soon be submitted.

When adding construction and operation/maintenance activities, a total of .around 8,500 direct and indirect jobs could be created across the five French projects, thus creating an industrial cluster dedicated to offshore wind. As part of this effort, Alstom and EDF Energies Nouvelles have carried out important upstream work, reinforcing discussions with local partners such as Neopolia and Vendée Expansion in order to identify and qualify offshore industry subcontractors.

At the same time, Alstom completed the offshore installation of its new-generation offshore wind turbine, the 6-MW Haliade™ 150, one of the largest offshore wind turbine on the market off Ostend harbour at the Belwind site in Belgium. This is one of the most efficient offshore wind turbine since its yield is 15% better than existing offshore turbines. Following successful IEC[1] power performance measurement certification (power curve[2]), obtained in May 2013 on the first Haliade 150 commissioned at Le Carnet site in France, the machine is expected to secure its final certification during the first half of 2014. The offshore installation will help confirm how the machine behaves within the offshore environment for which it was specifically designed and developed.

[2] Power curve: Determines the turbine’s electricity production as a function of the average wind speed