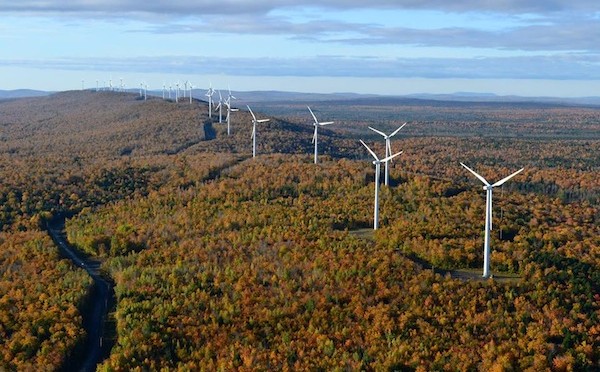 Wind energy is on the rise in Pennsylvania and is providing huge environmental benefits for the state, according to a new report released today by PennEnvironment Research & Policy Center. Pennsylvania’s wind energy is already avoiding more than 1.3 million metric tons of climate-altering carbon pollution – the equivalent of taking 278,241 cars off the road – while also saving more than 596.7 million gallons of water per year. This is enough to meet the water needs of 28,681 people.
“Wind energy has given us a lot to be thankful for this Thanksgiving,” said Elowyn Corby of PennEnvironment Research & Policy Center. “Now, our elected officials need to make sure we fully develop and take advantage of the major environmental benefits wind power brings to the table.”
Due to its current and future benefits, wind power is a key component of President Obama’s Climate Action Plan to reduce the carbon pollution fueling global warming by 17 percent by 2020. The plan calls for an expansion of renewable energy, investment in energy efficiency, and the first-ever federal limits on carbon pollution from power plants.
State Senator Daylin Leach explained that, “wind power has provided major economic and environmental benefits in Pennsylvania. It creates clean energy jobs and strengthens our economy, while preserving our air and water for future generations to enjoy. Promoting wind power and other renewable energy sources is the practical and responsible choice for our state.”
The report, Wind Energy for a Cleaner America, also shows that in 2012, wind energy in Pennsylvania avoided 1,255 tons of smog-causing nitrogen oxides and 1,551 tons of sulfur dioxide, which cause acid rain and soot.
State Representative Greg Vitali stated that “I congratulate Pennenviroment on the release of its report: ‘Wind Energy for a Cleaner America II’. I look forward to working with Pennenvironment to implement the report’s policy recommendations.”
Pennsylvania is ranked 17th nationally in terms of its total wind power production, an impressive feat given that the state has neither the coastal access nor the expansive planes that typically characterize a major wind-producing state. Wind power’s expansion in Pennsylvania is a clear testament to wind’s versatility as a power source, and Pennsylvanians’ recognition that wind power makes practical sense.
“Here in Pennsylvania we are also seeing significant economic benefits from wind energy development, which includes over $2 billion in investment in wind farms, construction, manufacturing and other supply chain jobs, millions of dollars in lease and tax payments to landowners and payments of millions to the local tax bases where these projects are located. While wind development in Pennsylvania has had a good start, a lot more needs to be done,” stated Bruce Burcat, Executive Director of the Mid-Atlantic Renewable Energy Coalition.
“Besides being environmentally conscious by removing carbon dioxide pollution and conserving 30 billion tons of water per year -wind energy projects play an important economic role by creating thousands of wind-based jobs in the construction and manufacturing sectors. Wind turbines consist of 8,000 parts and 200 tons of steel. And, when you consider that since 2005 the domestic content in American wind turbines has grown from less than 25 percent domestic content to 60 percent in 2011, that’s a lot of American jobs” pointed out Khari Mosley, the Pennsylvania Regional Program Manager at United Steelworkers Tower.
The report shows that wind energy is now providing over 2.2 million megawatt-hours (MWh) of electricity in Pennsylvania, and Pennsylvania could be on track to see a 97 percent increase in wind production over the next five years. If state and federal officials commit to continued progress, Pennsylvania could reduce the carbon pollution equivalent of more than 236,300 passenger vehicles and save enough water to meet the annual water needs of more than 27,800 Pennsylvanians.
“The increase of wind power and the decrease of coal is very favorable to our health. The air and water pollution from coal use damages our lungs hearts and brains,” explained James E. Jones MD.
Pennsylvania’s recent progress on wind is the direct result of our Advanced Energy Portfolio Standard – and federal incentives for wind power. Despite the clear benefits of wind and widespread bipartisan support for federal policies to promote renewable energy, fossil fuel interests and their political allies have vigorously opposed these initiatives.
“Wind energy is improving our quality of life in Pennsylvania,” said Corby. “We cannot let polluters and their allies stand in the way of wind’s benefits. Our legislators in Harrisburg need to expand our Alternative Energy Portfolio Standard, and our representatives in Washington need to do whatever it takes to extend federal wind incentives before the end of the year.”