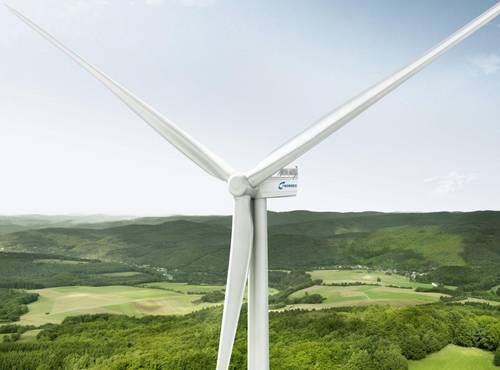 Nordex SE is extending the “Generation Delta” turbine platform launched in spring 2013 with the addition of a turbine for light-wind locations.

With the N131/3000, customers will not only be able to choose from strong and moderate-wind turbines but now also from a highly efficient system specially designed for IEC-3 locations.

The N131/3000 combines the proven advantages of the high efficiency and low sound power levels of the Generation Gamma’s N117/2400 turbine with the benefits of a high nominal output and the technical advances of the Delta platform.

A special feature of the N131/3000 is the substantially larger rotor. With rotor blades measuring 64.4 metres in length, the rotor diameter is 14 metres larger, thus producing a close to 26 percent increase in rotor sweep. This sweep plays a key role for energy yield. For this reason, the N131/3000 will achieve substantially improved project economics compared with existing turbines particularly at light-wind locations. The N131/3000 can derive up to 28.6 percent more yield from sites characterised by lighter winds. The reason for this is that Nordex also has raised the nominal output of this product for locations with wind speeds of less than 7.5 m/s by 25 percent to 3.0 MW.

Nordex is offering the N131/3000 on tubular steel towers with a hub height of 99 and 114 metres for international markets. The target markets for the N131/3000 are Central Europe, Scandinavia, Turkey as well as selected regions in Africa and the Americas.

One particular advantage of the turbine is the low operating sound power level. At nominal power, it achieves a sound power level of only 104.5 dB (A) – an advantage in densely populated regions or at noise-critical locations. A range of noise-optimised operating modes make it possible to run the turbine specifically meeting the requirements of those locations and so to reduce emissions even further.

The N131/3000 is based on the technical platform used in Generation Delta. All relevant certificates and documents required to apply for building permits have been available for the moderate-wind turbine N117/3000 and the strong-wind version N100/3300 since summer 2013. The first three Generation Delta turbines are in operation in Germany and Denmark. In Finland, two further cold-climate turbines were recently installed.

The first light-wind N131/3000 wind turbine is to be installed in the fourth quarter of 2014. Series production of the turbine is scheduled for 2015.

As one of the technological leaders in multi-megawatt wind power systems, Nordex is benefiting from the trend in favour of large-scale turbines. The Generation Gamma range comprises the N90/2500, N100/2500 and the N117/2400, which is one of the most efficient onshore turbines. To date, over 2,500 of these turbines have been produced. This experience with multi-megawatt turbines gives Nordex a decisive lead over most of its competitors. With Generation Delta, Nordex is now offering the fourth generation of its proven multi-megawatt platform (N100/3300, N117/3000, N131/3000). Nordex has installed a total of around 5,600 turbines with an aggregate capacity of more than 9,000 MW all around the world. With exports accounting for more than 85 percent of its business, Nordex SE plays a key role in international high-growth regions. The Company has offices and subsidiaries in 22 countries around the world with a total global headcount of over 2,500 employees.