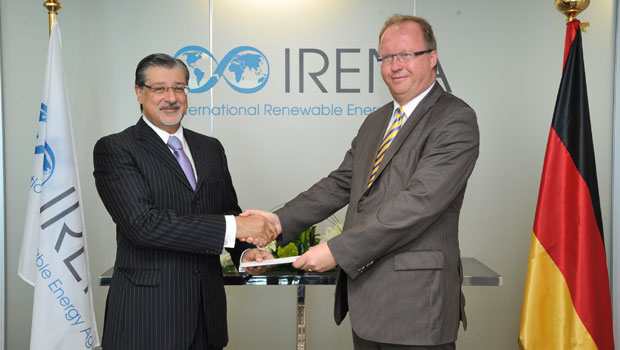 The International Renewable Energy Agency (IRENA) this week received its first two permanent representatives – a key step to build up the diplomatic functions of the young organisation’s headquarters in the capital of the United Arab Emirates.

Representatives of the UAE and Germany – the countries home to IRENA’s permanent headquarters in Abu Dhabi and Innovation and Technology Centre in Bonn – presented their credentials to IRENA’s Director-General, Adnan Z. Amin, at ceremonies in Abu Dhabi on 18 and 19 November.

“The appointment of permanent representatives reinforces IRENA’s partnership with the UAE, Germany and other member countries, strengthening international cooperation to capitalise on the huge market changes that are making renewable energy a competitive, realistic option around the world,” Mr Amin said.

“IRENA is the first major multilateral organisation to be headquartered in the Middle East, and it heralds an era of change in the heart of the energy industry,” said Dr. Al Zeyoudi.  “I am privileged and humbled to represent the UAE to IRENA as we embark ona defining period for the industry.”

The German Ambassador to the UAE, Nikolai von Schoepff, followed on Wednesday, 19 November, with credentials as Germany’s Permanent and Plenipotentiary Representative to IRENA.

“The quick accreditation of Germany—coming only weeks after the entry into force of the Headquarters Agreement between the Government of the United Arab Emirates and IRENA in October this year—is significant proof of the increasingly important role IRENA is playing as the international organisation for the promotion of renewable energy and the sustainable use of all its forms,” Ambassador von Schoepff said.

The IRENA-UAE Headquarters Agreement entered into force on 9 October. As part of the UAE’s commitment as host country, IRENA will move by 2015 to a purpose-built headquarters building in Abu Dhabi’s low-carbon, Masdar City.

IRENA also includes an Innovation and Technology Centre in Bonn, Germany, and a liaison office to the United Nations in New York.

Formally established in 2011, IRENA has grown rapidly to encompass more than 160 participating countries. Members spanning all sizes and economic types – from countries pioneering renewable energy markets to those building new infrastructure, and; from net energy importers to major fossil-fuel exporters – have expressed a common commitment to ensuring a sustainable global energy future.

“I am honoured and very pleased to receive Dr. Al Zeyoudi and Ambassador von Schoepff as the first two permanent representatives to IRENA, and it is fitting that they have come from the UAE and Germany,” Mr Amin said. “These are not only IRENA’s host countries, they are two of the most active partners in our mission to build a clean energy future powered by renewables.”

IRENA will hold its 4th General Assembly in Abu Dhabi on January 18 and 19, kicking off the annual Abu Dhabi Sustainability Week.

The International Renewable Energy Agency (IRENA) is mandated as the global hub for renewable energy cooperation and information exchange by 120 Members (119 States and the European Union). Over 40 additional countries are in the accession process and actively engaged. Formally established in 2011, IRENA is the first global intergovernmental organisation to be headquartered in the Middle East.

IRENA supports countries in their transition to a sustainable energy future, and serves as the principal platform for international cooperation, a centre of excellence, and a repository of policy, technology, resource and financial knowledge on renewable energy.  IRENA promotes the widespread adoption and sustainable use of all forms of renewable energy, including bioenergy, geothermal, hydropower, ocean, solar and wind energy in the pursuit of sustainable development, energy access, energy security and low-carbon economic growth and prosperity.