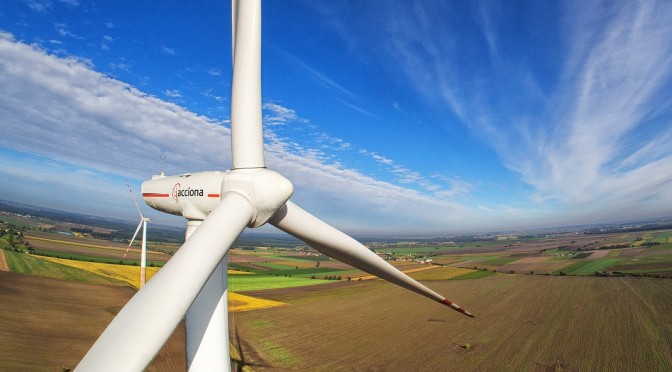 GL Renewables Certification, a leading certification body for renewable energy, has issued seven new certificates for different models of ACCIONA Windpower’s AW 3000 turbine (3 MW). This gives a guarantee to the sector and financial entities that the turbines respond to the quality standards required for their operation in wind farms.

With these new certificates, which were received during the EWEA Offshore 2013 trade fair in Frankfurt, ACCIONA Windpower now has 15 awarded for its 3 MW platform, a range of turbines for which the company has supplied or has orders for over 1,300 MW.

Specifically, GL Renewables Certification (GL) has issued the Design Certificate for the AW 125/3000 IEC IIIa wind turbine, with a 125 meter rotor, 120 meter concrete tower and 61.2 meter blade, for grids of 50 and 60 Hertz (Hz). This model is specially adapted for sites with low wind speeds.

GL has also given the Type Certificate for another six models of the AW 116/3000 turbine with a 116 meter rotor. Apart from validating the design, this certificate indicates that AWP has a quality management system according to the ISO 9001 standard, that the manufacture of the main components of the turbine is done in line with the highest quality standards, and that the turbine is capable of passing the prototype tests defined in current standards.

The Type Certificate has been awarded to the models of the AW 116/3000 for 120 meter (hub height) concrete tower and for 92 meter tubular steel tower. Both have 56.7 meter blades in versions for frequencies of 50 and 60 Hz, and for operations in normal or cold climate conditions.

The first certificate, in 2004

ACCIONA Windpower has been designing wind turbines since 1999 and obtained its first certificate – for the AW 1500, 1.5 MW turbine – in 2004. Since then this platform has been awarded over 20 certificates from GL Renewables Certification, adding to the 15 obtained for its 3 MW turbines.

“These new certificates represent a major milestone in the development of our 3 MW range,” says Miguel N