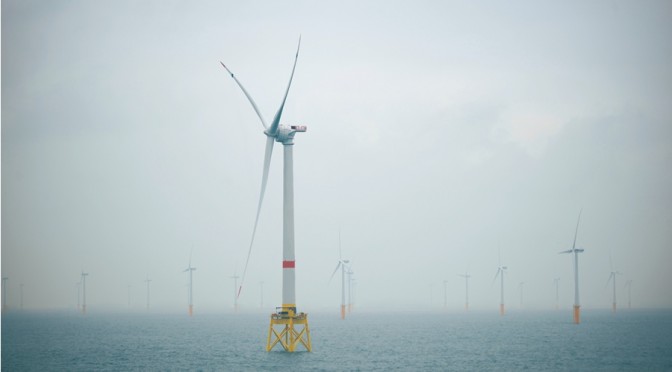 Alstom has just completed this week-end the at sea installation of its new-generation offshore wind turbine, the 6-MW Haliade™ 150, off Ostend harbour at the Belwind site in Belgium. This is the largest offshore wind turbine ever installed in sea waters. Thanks to its 150-metre rotor (with blades stretching 73.50 metre), the turbine is more efficient since its yield is 15% better than existing offshore turbines, enabling it to supply power to the equivalent of about 5,000 households.

how to pick up women

Following successful tests performed on the first Haliade 150 commissioned in March 2012 at Le Carnet site in France, which successfully obtained in May 2013 the IEC (International Electrotechnical Commission) power performance measurement (power curve[1]), this installation will help in confirming how the machine behaves within the offshore environment for which it was specifically designed and developed.

The 61-metre jacket has been set on top of pillars which have been sunk to a depth exceeding 60 metres. Then the 3 elements of the 78-metre tower were gradually assembled on the jacket. In all, the nacelle towers at a height of over 100 metres above sea level. The overall weight of the turbine and its structure totals 1,500 tonnes.

This new-generation wind turbine operates without a gearbox (using direct drive). Thanks to a permanent-magnet generator, there are less mechanical parts inside the device, making it more reliable and thus helping to reduce operating and maintenance costs. Lastly, the Haliade 150 features Alstom’s PURE TORQUE® design, which protects the generator by diverting unwanted mechanical stress towards the tower, thereby optimising performance.

Now that it has installed this wind turbine in sea waters, Alstom has reached an important milestone in the industrialisation process of its 6-MW turbine. For its part, the Carnet wind turbine should be securing its final certification during the first half of 2014. The construction of the two factories in Saint-Nazaire (nacelles and generator) is well underway, and will end around summer 2014. The construction of the two Cherbourg factories (blades and towers) will follow.

“This project with Belwind asserts our technological leadership and our innovative abilities. The installation of our turbine which is simple, robust and efficient thus contributing in boosting the competitiveness of offshore wind energy,” stated Alstom Wind Senior Vice-President Alfonso Faubel.

“Belwind’s tried and tested expertise in completing offshore projects and setting up wind farms has helped Alstom to perform the installation work in sea waters under the best possible conditions. We are convinced that Alstom’s innovative wind energy technology will contribute in providing one of the future solutions to ensure clean, reliable and efficient energy,” said Belwind chairman Wim Biesemans.

[1] Power curve: Determines the turbine’s electricity production  as a function of the average wind  speed