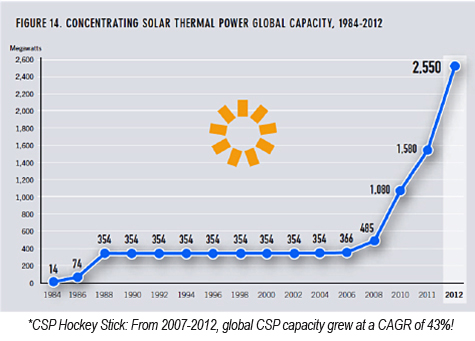 The solar thermal power market continued its expansion in 2012. Altogether, 712MW of additional power capacity was connected to the grid, a substantial increase in comparison to 2011’s 440MW. Cumulative installed capacity by the end of 2012 grew to 2.42GW.

Once again, almost all of the newly commissioned power capacity was in Spain (700MW), taking the country’s cumulative capacity to 1803MW, mainly distributed in Andalucia and Extremadura. The Spanish market remained driven by the feed-in tariff regulation published in May 2007 (RD 661/2007) North America’s contribution was just 7MW in 2012, but there are several hundred megawatts under construction so the contribution of the US market will be much higher in 2013.

Due to its bankability, the most popular Concentrating Solar Power (CSP) technology remains parabolic trough, with approximately 93% market share of the power capacity installed. By 2015 this value is expected to decrease to 70%, with power tower plants gaining share in the CSP market thanks to the capability to reach higher process temperatures. By end 2012 just 61.5MW of tower power plants were installed, but 630MW are under construction with scheduled commissioning dates in 2013 and 2014.

While Fresnel technology remains the least-implemented form of CSP, 2012 was a great year for it. A remarkable project was commissioned, the Puerto Errado 2 (PE2), a 30MW solar thermal power station built by Novatec Solar using its proprietary solar field technology. It is the largest CSP plant using Fresnel Technology Worldwide so far.

Pressure on the CSP market persists, especially from cost competitive PV installations. An indicator for this competition is the change of technology in initially assigned CSP projects that turned into PV projects. Such projects include:

The change from CSP to PV technology should be seen in both the market situation and the particular context of these projects (eg the failed business strategy and sunsequent insolvency of Solar Millenniumand the failed up-scaling of the Tessera dish technology respectively). Other key events of the year include:

The news for 2012 was not all bad however. Other big players made great steps forward though. For example, ACWA Power from Saudi Arabia is in a good position to move forward in the MENA region, while Spanish companies, Abengoa, Acciona, and Sener, are still in good standing.

2012 was also a record year for installed capacity, while the process of market diversification continues. New markets such as Morocco, India, South Africa and China gained momentum and old markets like Spain and the US stayed in place. However, as CSP projects move in 4-5 year timeframes, the installation figures reached are the result of the market conditions we saw in the past. In this context it is highly predictable that the market in Spain will reach a sudden stop and the market in the USA will face new challenges due to changing political and financial support schemes. The key highlights for the CSP market are: