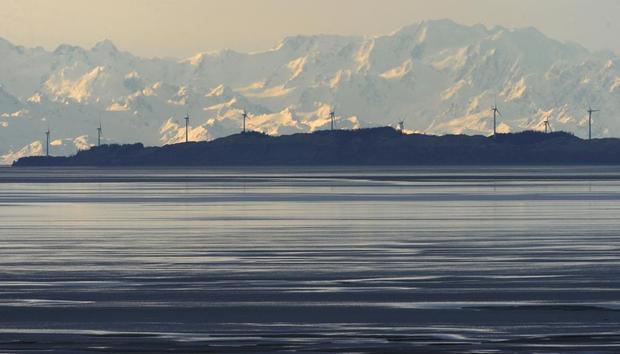 Declaring the first year of generating electricity from wind at Fire Island a success, its Native corporation owner plans to double the number of turbines even as its customer, Chugach Electric Association, hasn’t fully accommodated a power source as variable as the wind.

And there’s more power to come. The company plans to add 11 turbines to the six-mile-long island by October 2015 at a cost of about $45 million, Gibson said.

So far, access roads and four turbine pads have been excavated on Fire Island where CIRI owns 3,600 of its 4,000 acres. Construction began last month so CIRI could take advantage of a federal investment tax credit that expires at the end of the year, Gibson said. The credit could provide up to $15 million in savings.

Now, the wind just needs a buyer. Gibson said the company is in talks with utility companies. Chugach officials would not comment on negotiations.

Chugach currently purchases all of the generated and potential wind power from the Fire Island. It entered into a 25-year agreement with CIRI that began when the turbines powered up last year.

Chugach pays CIRI $97 for each megawatt hour of wind power, higher than the estimated $60 to $65 per megawatt hour Chugach pays on average for power generated from gas turbines, according to spokesman Phil Steyer. The fuel price is constantly fluctuating with the market.

Unlike natural gas, which provides 88 percent of the company’s power, wind is not made to order. It’s hard to predict and cannot be stored, so the electricity produced doesn’t come close to the total capacity of the wind turbines, Steyer said.

“As soon as it’s produced, it instantaneously goes to Chugach,” Gibson said.

During the year, Chugach sent 46,967 megawatt hours of wind energy into the Chugach grid out of the 50,092 available megawatt hours. The catch with wind is Chugach pays for the island’s entire potential production even if not actually needed in the grid.

The use of wind saved 474 million cubic feet of gas last year, for a savings in fuel of about $2.4 million. But Chugach spent $4.6 million on wind power.

Eventually, experts predict gas costs will exceed the cost of turning wind into electricity, and if that happens, the wind power contract will be a good deal for Chugach and its customers, Steyer said.

Until then, customers will pay a surcharge. Only Chugach retail customers pay for wind power — an average of $1.22 on their monthly bills, Steyer said.

Chugach’s long-term goal is that its energy will come from 90 percent renewable resources and 10 percent from fossil fuel. Steyer said there is no specific date for when that goal will be met.

The decision on the mix of electricity sources at any given moment is made by a Chugach employee, the generation dispatcher, in a control room in Anchorage where a lighted map of the Chugach electrical system covers the wall.

Each hour, the dispatcher estimates how much power customers will consume and orders the necessary fuel, wind and hydro power to keep lights on.

“It’s like having a fleet of vehicles, not all have the same gas miles,” Steyer said .”If you have the choice, you’re probably drive the Prius to and from work rather than the school bus. They’re both vehicles, they both can move you, but the operating costs are different.”

Working in 12-hour shifts, the dispatcher uses data from the day before, six days before and, in the case of holidays, the previous year to forecast how much electricity consumers will need.

A computer screen mounted to the wall at Chugach headquarters on Electron Drive near International Airport Road displays a line graph that follows energy consumption. It dips down around 4 a.m. when consumption drops and climbs back up until around 9 a.m..

“We make our best estimate of what winds are going to do,” said Burke Wick, director of system control. “It may or may not show up and it may show up during hours different than we predicted.”

The turbines only produce power when winds are blowing, but not too strongly. At about 7 mph the turbines turn on and at about 56 mph they stop generating power to prevent equipment damage, Gibson said. At 22 mph, the turbines operate at full capacity, 17.6 megawatts between all 11.

The adjustment is made by changing the angles of the turbine blades to take on more or less wind. It’s done by computer and takes about five minutes, Wick said.

Gibson said the weather hasn’t caused any problems with the turbines so far. Once, a tree fell on the power line on Fire Island when gusty winds hit last September, but that’s the only unexpected issue she could recall.

CIRI built the wind project to provide utilities in Southcentral Alaska with renewable energy, reducing the amount of climate-changing carbon dioxide sent into the atmosphere when natural gas is burned. In 2010, Gov. Sean Parnell signed the state energy policy into law that says by year 2025, Alaska will get 50 percent of its electric from renewable resources.

Alaska Energy Authority spokeswoman Emily Ford said wind capacity has multiplied statewide from 3.3 megawatts in 2008 to 66.5 megawatts by the end of 2012.

“Wind is an important part of our energy mix and continues to grow,” Ford said.

Fire Island is the largest privately owned wind farm in the state. But the largest wind project in Alaska is Eva Creek Wind, located about 14 miles north of Healy and a project of Golden Valley Electric Association. The 12 turbines serve meters in Fairbanks, Delta Junction, Nenana, Healy and Cantwell.