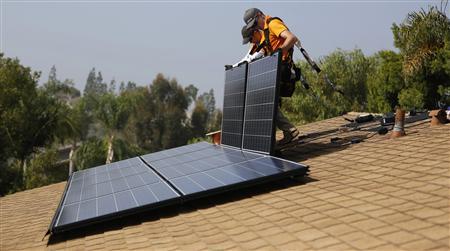 On a sleepy suburban street near Los Angeles, Reno Mendenhall walks up to a modest home and knocks on the door. The tall, blonde, 31-year-old is so clean cut that he says he is sometimes told he looks like Britain’s Prince William.

A woman comes to the door and Mendenhall, dressed in gray shorts and a bright orange polo shirt that says Vivint, begins his sales pitch. He’s tried two blocks of houses without success.

Mendenhall began knocking on doors a dozen years ago, dressed more formally – he was a missionary for the Mormon Church in Brazil. These days he is a foot soldier in the small army of salesmen who pitch Vivint Solar, the fast-growing rooftop solar installation and financing business owned by Blackstone Group LP.

“I’m kind of numb to rejection,” Mendenhall said, describing what he learned in two years pounding the pavement for the church. “It helps you talk to people. I think other people who have served missions would say the same.”

In fact, Vivint Solar, a startup founded by an entrepreneur and former Mormon missionary, finds members of The Church of Jesus Christ of Latter-day Saints who knocked on doors as part of their own missions are among its best salespeople, making up about half the salesforce.

Homeowners so far like what they are hearing: the company installs panels at no cost to the homeowner, charging for the electricity used at a rate that is 20 to 30 percent lower than the rate charged by the local utility. The contracts last for 20 years, and the rate goes up slightly each year.

Vivint and its backers own the systems, and the company is able to keep customers’ costs low thanks to the confluence of government subsidies and falling prices for solar equipment.

The homes are still connected to the electric grid though, allowing Vivint to sell excess power to the local utility and provide electricity when the sun is not shining.

It’s no small feat given the head start of older residential solar rivals like Verengo Inc and market leader SolarCity Corp, shares of which have soared more than 500 percent since their December public market debut. And though Vivint said it is not eyeing the public markets just yet, solar analysts and investors are bullish on its prospects, thanks to the company’s unique sales approach.

“They have been very aggressive since they entered the space,” said Shayle Kann, who follows the U.S. solar market for GTM Research. “They’ve done very well. They are efficient and quick and their turnaround times are very fast.”

Most of Vivint’s growth has come from converting homeowners to solar customers on their front doorsteps and at kitchen tables in the same way the likes of Avon Products Inc and Mary Kay Inc won over cosmetics buyers.

“It’s still a misunderstood or unapproachable product,” Vivint Solar’s Chief Operating Officer, Brendon Merkley, said in an interview. “When you can sit down next to someone at their home and say ‘You can do this with zero money down and start saving immediately,’ that works very very well.”

The financing schemes allow homeowners to avoid the $20,000 to $30,000 upfront cost to install a typical home system.

Blackstone bought Vivint Solar’s parent company, Vivint Inc, a year ago for more than $2 billion. Formerly known as AFX Alarm Systems, the Provo, Utah company started selling alarm systems door-to-door in 1999. Founder Todd Pedersen said knocking on 20,000 doors as a missionary in the Dominican Republic inspired the business plan. Vivint had $400 million in revenue last year. It does not disclose how much of that came from solar.

Blackstone saw Vivint’s door-to-door sales strategy as “unique and attractive,” enabling it to acquire customers at a low cost, Blackstone’s Peter Wallace, who led the firm’s investment in Vivint and sits on its board, said in an email.

Blackstone, an alternative asset manager led by billionaire investor Stephen Schwarzman, plans more IPOs of its assets, but Wallace would not comment on a potential Vivint Solar IPO.

The U.S. solar market has grown dramatically in recent years thanks to generous state and federal incentives and a 60 percent drop in the price of solar panels in less than three years.

The door-to-door strategy works best in densely-populated, often urban locations where other solar providers are less dominant, according to Kann, who said the risk is that Vivint will run out of room to grow in those areas. Merkley says that scenario is “years and years away.”

SolarCity Corp is the market leader in financed solar systems and the top residential installer, with 26 percent of the market. The Elon Musk-backed company and other installers dabble in door-to-door sales, but none has an operation like Vivint’s. SolarCity spokesman Jonathan Bass said the company has used canvassing as part of its sales strategy “for quite some time,” but would not give specifics.

Vivint Solar began just two years ago with three sales people in New Jersey and now employs 900 people in seven states, thanks in large part to its parent company’s resources. The company has “toyed with” marketing solar to some of the 750,000 Vivint Inc customers, Merkley said, but at this point sees them as more of a “strategic reserve.”

The backbone of Vivint Inc’s salesforce has historically been Mormon college students, recently returned from religious missions, who sell the company’s alarm systems on their summer vacations. Mendenhall, for instance, sold alarm systems from Alaska to Georgia for five summers before joining the solar unit. The father of three now manages the company’s new Orange County, California office.

The salesforce is diversifying, however. About half of Vivint Solar’s nearly 200 sales staff are recruited locally outside the Vivint establishment.

ACROSS THE KITCHEN TABLE

Financed solar systems have grown to dominate the residential solar business in the last few years, and the market is expected to reach $5.7 billion in 2016, up from $1.3 billion last year, according to GTM Research.

Under most financed models, ownership of a residential system is transferred to a financial institution that can claim a federal tax credit worth 30 percent of its value. The homeowner pays for either the panels or the power they generate monthly.

Just since August, Vivint has raised $740 million to finance its solar projects from undisclosed institutions.

Unlike other companies who finance solar systems, Vivint offers only one product: the power purchase agreement, or PPA. Under that model, the customer buys the power they consume from Vivint instead of their utility.

SolarCity and others, on the other hand, offer several choices: customers can lease their solar panels for a monthly fee, elect a PPA agreement, or buy them outright if they wish.

But Merkley said Vivint’s streamlined offering isn’t a drawback. Rather, it is a critical part of making its sales pitch easy to understand in a brief exchange.

“I still struggle to explain to my mother how a lease works,” Merkley said, calling the PPA “inherently simpler… The salesforce can more effectively explain it across the kitchen table.”