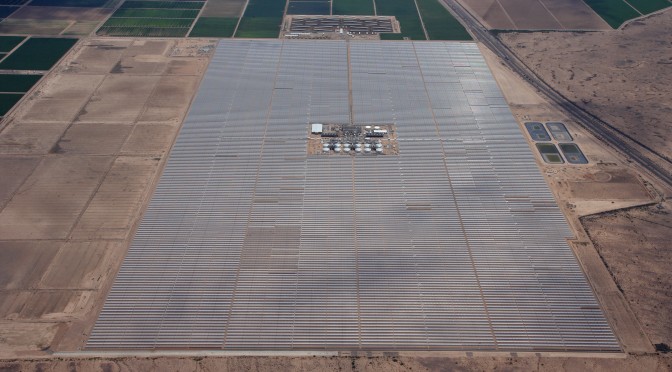 Spain’s Abengoa gave members of the U.S. media a tour of its Solana concentrating solar power (CSP) plant in Arizona, the largest parabolic trough plant in the world.

The Solana Concentrated Solar Power (CSP) plant, which has thousands of mirrors, has a total capacity of 280 MW, a capacity similar to that of a nuclear power plant.

“For us, this is extremely satisfying,” Abengoa Solar CEO Santiago Seage told Efe, adding that Solana was the only concentrated solar thermal power plant in the United States with storage capacity. Solana can produce electricity for six hours even if there is no sunlight, Seage said.

“Electric utility Arizona APS (Arizona Public Service) needed a power plant that could produce electricity in the summer after nightfall to meet peak night demand from air conditioners. A photovoltaic plant (with solar panels) would not do because it could not produce when there is no sun,” Seage said.

Abengoa has a 30-year contract to sell electricity to APS and the plant is connected to the utility’s grid.

Solana cost more than $2 billion, with over 70 percent of the financing provided by the federal government “on very good terms,” Seage said.