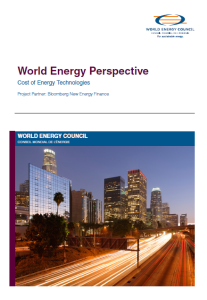 In recent years renewable energy has seen a cut in production costs, and according to a new report it will account for 34 percent of the world’s energy production by 2030, with particular growth in solar power and wind energy.

By 2030 renewable energy will account for 34 percent of the world’s energy production, primarily because of cost-effectiveness, according to World Energy Perspective: Cost of Energy Technologies,a recent report published by Bloomberg-World Energy Council.

Over the years renewable energy has seen a cut in production costs. Wind power is currently cheaper than fossil fuels in a number of countries including Brazil, while in some markets domestic solar power systems cost less than purchasing electricity from the grid. The report suggests that PV solar will grow from two percent of installed capacity last year to 16 percent by 2030, while wind power will increase from five to 17 percent.

These growth forecasts show why Enel Green Power has planned investment for the development of both of those technologies.

EGP has a total installed wind power capacity of 4.9 gigawatts and 257 megawatts of solar power, and has a significant presence in a number of extremely promising wind power markets, such as Brazil – where EGP is developing wind power projects totalling 283 MW of capacity – Chile and Mexico, and in Mediterranean countries like Greece, France, Italy and Spain, where it is developing solar power.

By 2017, Enel Green Power expects to increase the share wind and solar power in its generation mix: solar will grow from one percent to 7 percent of total installed capacity, while wind power will increase from 54 to 58 percent.