A quick snapshot of the crystalline silicon (c-Si) supply chain within the solar PV industry at the end of Q3’13 reveals that China dominated the midstream production stages, from ingot to module. However, unlike previous periods during which China dominated c-Si supply, this time China is also the largest contributor on the demand side.

While China has been the largest solar PV manufacturer since 2007, its emergence as a leader in end-market demand is relatively new. China’s share of global demand will more than double in 2013, compared to 2011 when it was 10%. In Q3’13, production across the various stages of the c-Si supply chain ranged between 8 GW and 11 GW, while global demand will reach 9 GW, a new record for the third quarter. China’s contribution to this was more than 25%.

The exception to total c-Si value-chain supply dominance is the polysilicon segment,  which is more geographically diverse than all other downstream c-Si process stages. 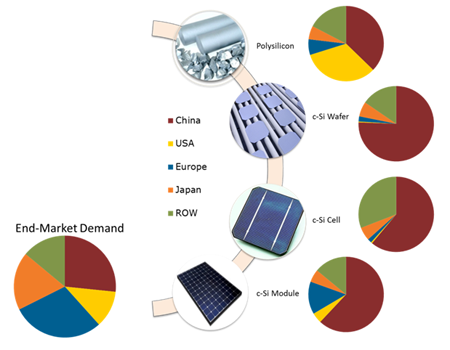 The emergence of China in driving PV demand is impacting both global end-market figures and is also having a profound impact on the financial health of the remaining domestic suppliers. With the importance and risk attached to European shipments having been significantly lowered during 2013, the ability to pick-and-choose more profitable supply arrangements while increasing shipment levels will come as welcome news to a PV industry as it recovers from its highly unprofitable phase of 2012.