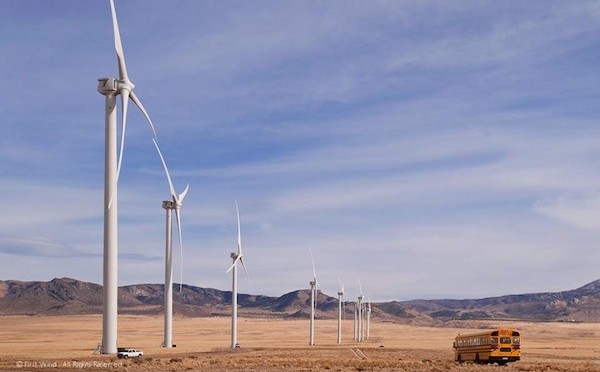 You have three apples on your kitchen counter, nestled amongst various other fruit. Two are red, and one is green. Can we safely conclude that 66% of all apples are red? If you answered yes, then you’ll relish this article in the Australian Financial Review:

“Rural landholders across Australia may face a disappearing pool of buyers and plummeting values of up to 60 per cent because of neighbouring wind farms, a new, independent report has established.”

The article references a mysterious report, which seems impossible to find anywhere online. I asked the author of the article where the report is published, but haven’t had a response. Reports that claim to demonstrate a reduction in property values from wind farms crop up a few times a year, and they invariably feature strong conclusions drawn from extremely weak evidence.

The last report was referenced in a Daily Telegraph article in February this year – published by the clandestine ‘Wind Burst Publishing’. A quick check on the PDF properties of that report showed that it was created by Susan Richmond, secretary to Peter Mitchell, once head of the Landscape Guardians and now chairman of the pointedly anti-wind ‘Waubra Foundation’.

This new report, commissioned by farmer Paul Vallely (on the Community Consultative Committee for the Golspie Wind Farm development) and published by registered valuer Peter Reardon purports to show two properties that suffered value losses of 30% and 60%, and a third property that showed no change in value. The author attributes the losses on these two properties directly to the presence of the Cullerin Range and Capital* wind farms, based on comparisons to ‘four or five’ equivalent properties, bringing the total sample to between 13 and 15 (presumably). There is no information on how these properties were chosen, or discussion of other factors that might have impacted the variation in price for the two properties that saw a reduction in sale value. By shifting the weight of discourse towards emotion rather than analysis, the capacity to detect the flaws in weak evidence is diminished. Websites devoted to invoking an emotional response facilitate this. Source: windturbinepropertyloss.org

The only other information I found was from a media release from the ‘Australian Industrial Wind Turbine Awareness Network’, a group that seems comprised solely of a wind farm opponent near Flyer’s Creek. The author seems to imply Reardon believes wind turbines are some sort of disease: “In the report, Mr. Reardon says a plague of more than 3,000 turbines are either in  operation or proposed for construction across country New South Wales”.

The AFR article does mention a report published by the NSW valuer general in 2009, by the firm Preston Rowe Paterson (PRP), which could find no evidence of a link between the presence of wind farms and a decrease in property values. Looking at eight wind farms and 45 sales, the firm found 40 of these showed no reduction in value (It’s worth noting the report states their findings are limited).

In a 2013 presentation for the Coopers Gap Wind Farm Community Consultative Committee, PRP also highlighted some new research that has emerged regarding wind farms and property values – Hoen and Wise examined 7,500 sales, Hinman studied 3,581 transactions over nine years, and Carter studied 1,298 sales over 13 years. None of these found any statistically significant effect on property values. Additionally, Magnusson and Gittell found in 2012, after looking at 2,065 residential transactions, that wind farms have no discernible impact on property values.

These studies seem tiny in comparison to a recent report published by the Lawrence Berkeley National Laboratory in August this year, which examined 51,276 sales – a sample of transactions 3,400 times bigger than the sample instanced in the AFR article. The researchers performed spatial hedonic analysis on properties surrounding wind farms in the US, and found that “Regardless of model specification, we find no statistical evidence that home values near turbines were affected in the post-construction or post-announcement/pre-construction periods”.

Sample size is important, yet it seems to have been poorly considered in the AFR’s story. To illustrate this further, here’s a graphical representation of the different samples used in the studies cited:

The larger our sample, the greater ability we have to separate the signal from the noise. When our sample is tiny, and there is no information provided on whether that sample is randomised or specifically selected, it’s safe to say the evidence is nowhere near as strong as evidence that utilises a large sample, controls for variables, and importantly, is available publicly to be scrutinised.

Understanding the importance of scientific analysis comes into stark relief when we consider the impact of fear and uncertainty on wind farm developments, and the communities that surround them. Mentioned often in the research covering this issue is a phenomenon known as ‘Anticipation Stigma’. Hinman writes in her 2010 study:

“Wind farm anticipation stigma theory is a concern surrounding a proposed or approved wind farm project that is primarily due to factors stemming from a fear of the unknown: a general uncertainty surrounding a wind farm  project regarding the aesthetic impacts on the landscape, the actual noise impacts from the wind turbines, and just how disruptive the wind farm will actually be.”

The level of public support for wind energy can sometimes drop during the planning process, but quickly rebounds once the wind farm begins operation. Source: Berkeley Lab Presentation
how to get your ex back

If one wanted to reliably catalyse the stigmatisation of wind energy during the development process, spreading fear and uncertainty around the impact of wind farms on property values would be a good place to start. Basing this on small sample sizes and secretive, inscrutable reports ensures that fear and uncertainty will linger in the air, unchallenged. The farmer who commissioned the inscrutable report states that “Word should get out that they do have a detriment on value”.

Making an assertion about the impact of wind farms on property values requires careful consideration, strong evidence and robust review. If the need to carefully correct for error and bias in research is neglected, those pushing to ‘get the word out’ on wind farms risk causing the very problems they seek to avoid.

Ketan Joshi is a Research and Communications Officer at Infigen Energy, interested in scientific, technical and community issues surrounding renewable energy development. The views expressed above are his own, and not those of his employer.

*Capital Wind Farm is owned and operated by Infigen Energy

This article by Ketan Joshi originally appeared on the RenewEconomy blog and is reprinted here with the permission of the author.