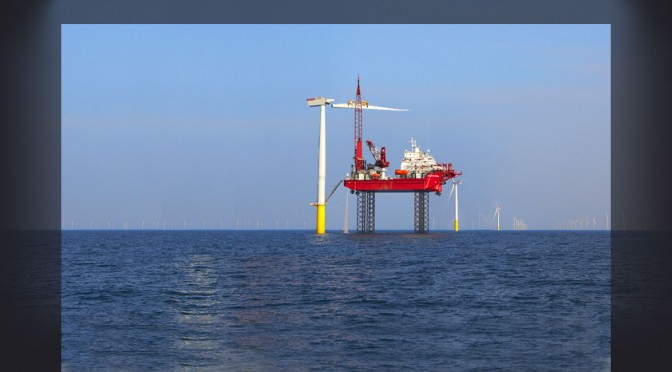 The world’s largest and most powerful offshore wind turbine is now standing at Energy Park Fife.

The Samsung Heavy Industries prototype offshore turbine is due to become operational later this year.

The structure is situated 50 metres offshore in the Firth of Forth and the tip of its blades stretch 196 metres above the sea.

The nacelle, which contains all generating components for the turbine, was installed on Friday, October 11, and that was followed by the attachment of the three massive blades.

SHI is one of the world’s growing suppliers of onshore wind farm turbine technology and this is its first European offshore wind project.

The Korean company has invested £70million in the Fife wind turbine demonstrator scheme, which has the potential to create up to 500 jobs in Scotland.

The project has the backing of First Minister Alex Salmond, whose Government wants all Scotland’s electricity to come from renewables by 2020.

SHI said that, following a successful testing period, it will work to attract orders for its turbines. This would allow it to build a world-class manufacturing facility at Energy Park Fife.

SHI, which wants to become a leading player in the European offshore wind sector, has been manufacturing 2.5MW wind turbines for four years and already has turbines installed in Korea, the US and Canada.

It chose to base its European operation at Energy Park Fife because of the area’s growing energy cluster and the huge opportunities this presents for supply chain companies, particularly those involved in the offshore wind sector.

The project was technically challenging and GRAHAM has risen to meet these challenges and has delivered a high quality product on time and within budget. This project cements the relationships we have forged with Samsung Heavy Industries, Fife Council and Scottish Enterprise as well as our supply chain partners and allows GRAHAM to continue to be an active participant and leader in the renewables and marine sector.”

SHI worked very closely with both Fife Council and Scottish Enterprise as it developed the project, which could help put the area firmly on the map as a major European hub for renewable technology.

“This is a vitally important project for the local area as this mast is a visual example of the regeneration of the Levenmouth Area.”

Maggie McGinlay director of energy and clean technologies at Scottish Enterprise, said: “The development of the SHI turbine in Fife is testament to Scotland’s growing reputation as a global centre of expertise for the next generation of offshore wind energy technologies.

“This, along with planned investment from other key players such as Areva and Gamesa, is helping to create a potential manufacturing hub on the east coast, which would lead to significant opportunities for our supply chain companies.

“We look forward to continuing to work with SHI to support its long-terms ambitionns for Scotland.”

The Crown Estate also worked closely with Scottish Enterprise to ensure Samsung had certainty regarding access to the seabed and to provide specialist advice, support and guidance to help it become established in the UK market.

Ronnie Quinn, The Crown Estate’s Energy and Infrastructure Lead in Scotland, said: “This marks a big step forward for offshore wind technology development, and we’re pleased to be providing ongoing support to Samsung.

“This long-term investment is a hugely important contribution to building the supply chain in Scotland and in driving growth of a world-class offshore wind industry.”