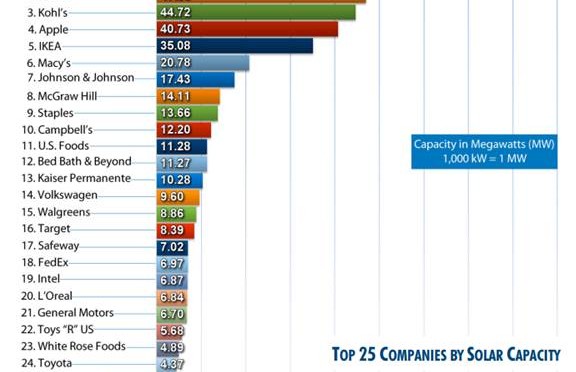 U.S. companies are adopting solar power faster than ever before.

In the last year, “U.S. businesses, nonprofits and government organizations have blanketed their rooftops and properties with over 1,000 megawatts of new photovoltaic solar installations,” according to the second annual Solar Means Business report from the Solar Energy Industries Association (SEIA) and The Vote Solar Initiative. “As of mid-2013, cumulative commercial deployment totaled 3,380 megawatts at over 32,800 facilities throughout the country, an increase of more than 40 percent over last year.”

The companies moving to solar energy is “like a ‘Who’s Who’ of the most successful corporations in America,” said SEIA President and CEO Rhone Resch. “These iconic brands are leading the way.”

By installing solar to cut their own operating expenses, Resch added, companies benefit both their customers and their shareholders. At the same time, they reduce U.S. dependence on foreign energy sources, help create American jobs, boost the U.S. economy and preserve the environment, he said. 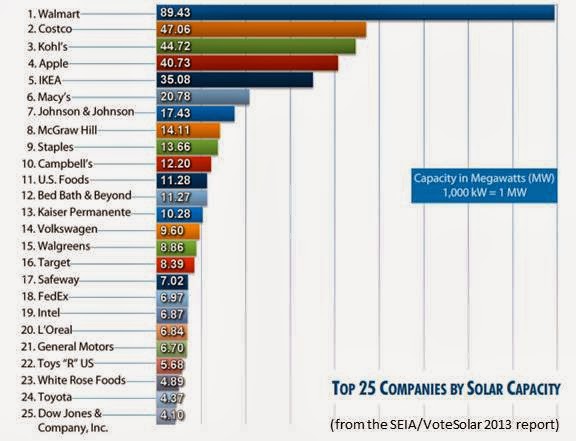 There were three key factors driving this “unprecedented growth,” according to the report. The first was a 30 percent drop in the average installed price for commercial-scale solar since 2011.

The second was “a challenge to businesses’ long-term budgets” from utility price volatility. “Whether the system is purchased upfront or financed through a power purchase agreement or lease,” the report says, “solar offers long-term price visibility and a valuable hedge against rising and volatile conventional electricity rates.”

Third, companies continued to be able to offset tax liability with solar’s 30 percent federal investment tax credit, which will remain unchanged through the end of December 2016.

With the growth of solar system installations driven by solar’s value proposition, the report notes, “117 million people in 30 states and Puerto Rico live within 20 miles of at least one of the 1,000 commercial solar installations that were analyzed.”

The report notes that its methodology likely overlooks a significant part of the solar installed because it only includes systems that supply power directly to on-site company facilities.  It excludes installations that supply electricity to other tenants or sell wholesale to utilities.

That leaves out “some real estate developers and investment trusts (REITs) that are extremely active in the solar market.”

Developers of facilities like warehouses and distribution centers will often sell at wholesale rates to utilities because the large roof can host an array with an output higher than the occupant’s consumption. Tenants of real estate investments, like strip malls and big-box stores, typically use up the solar installation’s output. 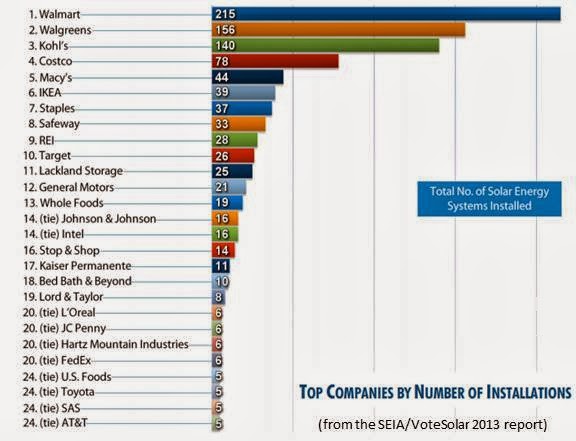 “For years, the promise of solar was always ‘just around the corner.’  Well, solar has turned the corner and found itself on Main Street USA,” said Vote Solar Executive Director Adam Browning.  “These companies — titans of American business — may have vastly different products, business models, and geographic locations, but they all have something in common: they know a good deal when they see one.”