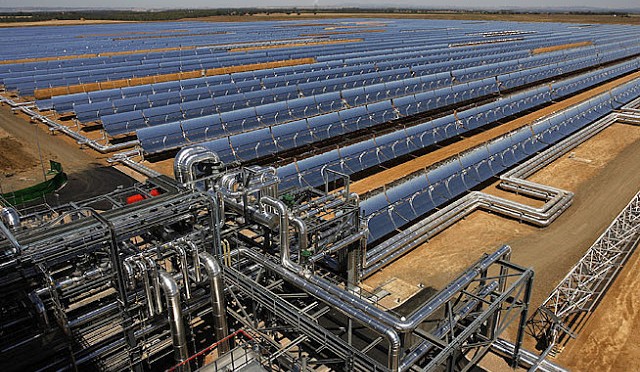 Eskom and the French Development Agency (AFD) agreed on Monday night, during French President Francois Hollande's state visit to South Africa, to facilitate the signing of the loan.

Concentrating solar power (CSP) technologies concentrate the sun's energy through large mirrors and uses this concentrated thermal energy to produce steam to drive a conventional steam turbine for electricity generation. The process is similar to that of conventional power plants in that steam is used to power a turbine and generator, but differs crucially in that fossil fuel combustion is replaced with non-polluting solar energy.

Eskom chief executive Brian Dames said in a statement on Monday that the Upington CSP project, one of Eskom's first commercial-scale renewable energy projects outside of its existing hydro portfolio, “puts us on a path towards reducing our carbon footprint and investing in a sustainable energy future”.

The Upington CSP project is expected to deliver an annual energy production of 525 GWh and will be sufficient to power 200 000 homes.

In 2011, Eskom and AFD signed a €100-million loan facility for the financing of Eskom's 100 MW Sere wind farm near Vredendal in the Western Cape.

“The AFD is a valued partner and has been a key contributing factor to the progress we've achieved at both the Upington CSP plant and Sere wind farm,” said Eskom's acting chief financial officer, Caroline Henry.