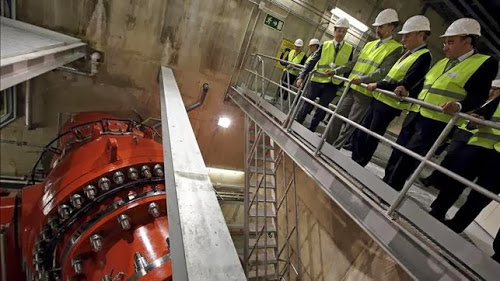 During the ceremony, the Prince of Asturias unveiled a plaque and IBERDROLA Chairman highlighted the Company's commitment to Spain, “where we have assets of €40 billion, provide jobs to 70,000 people and, in the last 12 years alone, have invested €22 billion and made purchases from local suppliers worth €50 billion.”

Also, Galán pointed that “these facilities renew our continued engagement with the region of Valencia, where we give employment to thousands of people and, since 2001, have invested €4.5 billion and made purchases to local companies of nearly €4 billion.”

During his speech, the Chairman of IBERDROLA highlighted that the Cortes-La Muela hydro scheme is an example of an economically and environmentally sustainable complex: “It uses available excess generation capacity to store, and produce electricity during periods of high demand”, a clear example of functioning energy storage.

“With this inauguration,“ he said, “the Company maintains its commitment to clean energy, particularly to hydro electric power in which we have nearly 10,000 MW capacity world-wide.” In this regard, Galán recalled the opening, earlier this year, of the San Esteban hydro power plant in and the start of construction at San Pedro hydro scheme, both in the Sil river basin, both in Galicia.

The event was attended by the President of the regional Government of Valencia, Alberto Fabra, the Under-Secretary of Telecommunications and the Information Society, Víctor María Calvo-Sotelo, as well as members of IBERDROLA’s management committee.

With 1,722 MW installed capacity, the commissioning of the last phase at IBERDROLA's La Muela marks the start of operations of Europe's largest pumped-storage hydro power scheme, with over 2,000 MW total capacity and capable of generating around 5,000 gigawatt/hour of electricity per year.

The construction of this clean energy facility on the river Júcar has had an important economic impact in the area, with total investment exceeding €1.2 billion. During construction works of La Muela extension , which lasted seven years, thousands of jobs were created, contracts were placed with over 30 local companies operating in the region of Valencia and equipment worth several hundred million euros was purchased.

Galán said that not far away, IBERDROLA came into being in Spain 112 years ago at the El Molinar hydro power scheme, and reiterated that the Company “has become the leading developer of hydroelectric technology in Spain – spearheading respect for the environment and the deployment of clean energy.”

This vision has consolidated IBERDROLA as the world's wind energy leader and one of Europe's largest electricity utilities, providing energy and gas services to nearly 100 million people in the UK, USA, Brazil, Mexico and Spain, with presence in many other countries. At present, more than 70% of IBERDROLA's activities are carried out outside Spain. This has also facilitated the international expansion of several key supplier companies.