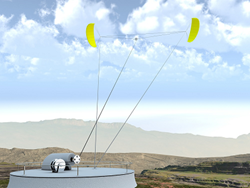 A wind power vs. solar power research analysis is published by Airborne Wind Energy Labs. The analysis is based on comparisons of the power intensities of power-harvesting surfaces. Intensity is a physical quantity that measures the power that is transferred per unit of area.

Compared to conventional wind turbines, airborne wind energy systems (AWES) have higher effective intensity and lower balance-of-system costs. The only necessary components for an AWES are power-harvesting surfaces (i.e., wings), an electrical generator, a tether and a control system. These components are relatively inexpensive.

The discovery of large areas with persistent low-level jet streams provides hope in overcoming the main shortcoming of wind as an energy resource, which is the intermittent and unpredictable nature of wind power.

The advantages of wind over the solar are even greater in the higher-latitude and cloudy areas of the United States, especially the Northeast, the Great Lakes region and Washington state.

In a wind energy system, the wing is not only a power-harvesting surface, but also a power-concentration device. This gives wind the edge over not only solar, but also tidal, wave, hydrokinetic, heat gradient and other seemingly available sources of renewable energy.

The analysis concludes: wind power is the most effective of all alternative renewable energy sources and airborne wind power is the most promising direction for wind power development.
Airborne Wind Energy Labs is best known for its breakthrough technologies that allow an order of magnitude decrease in wind energy costs and manufacturing of synthetic liquid fuels from natural gas using wind energy.