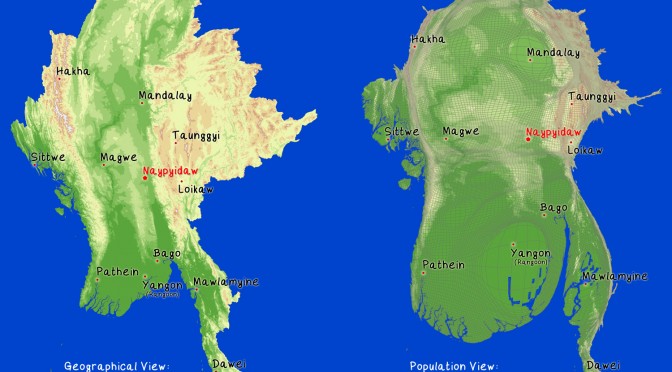 Only 30 percent of Myanmar’s population has access to electricity. Yangon and Ayeyarwady regions, as well as Rakhine State, may be among the country’s first locations to receive windmill-generated electricity after power producers from China and Thailand announced their continued progress to develop wind farms, officials said.

China’s Three Gorges Co and Gunkul Engineering Public Co of Thailand each signed a pair of agreements with the government dating from 2011 that would launch wind power projects in nine locations in Myanmar, U Khin Maung Win, deputy director general of Electric Power under the Ministry of Electric Power, told The Myanmar Times.

He said Three Gorges Co is now surveying in Chin and Rakhine states as well as Ayeyarwady and Yangon regions, while Gunkul Engineering is assessing the feasibility of wind power in Mon, Kayin, Shan and Kayah states and Tanintharyi Region.

“They are surveying based on worldwide and regional weather patterns,” he said, adding that the whole process could take a year, but that construction could begin as soon as it is finished.

“They have to study wind speeds 24 hours a day and throughout the year continuously.”

Gunkul Engineering estimated that it would build wind power plants capable of generating 2930 megawatts, while Three Gorges Co aims to have a capacity of 1102MW at its plants, said U Khin Maung Win.

“These figures are just estimates according to an initial study. It will take at least two years to know the actual capacity in those regions,” he said.

Gunkul has stated that it hopes to have farms operational by 2015 before reaching maximum capacity by 2018.

Although it is too early to tell how much investment it would take to meet their goals, the projects will not come cheap. Construction of one 150-metre-high wind turbine would cost about US$1 million to install, according to earlier government estimates.