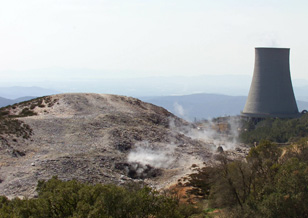 One hundred years after the construction of the world’s first geothermal power plant in Larderello, EGP has inaugurated a museum dedicated to the development of geothermal power throughout history.

The Geothermal Museum wasinaugurated yesterday morning at the Enel Green Power Village at Larderello in Tuscany, in the presence of the region's Environmental and Energy Councillor Anna Rita Bramerini, Enel Green Power CEO Francesco Starace, the President of the Province of Pisa Andrea Pieroni, the Mayors of the areas where geothermal energy is produced and the heads of a number of authorities, including the Prefect of Pisa Francesco Tagliente.

The Geothermal museum is dedicated to the evolution of geothermal energy and its industrial advances throughout history. Across 10 rooms visitors can find out all about geothermal energy, from the Etruscan Roman baths to its uses in chemistry, the discovery of its ability to produce electricity and the birth of the geothermal electricity industry. The Museum will be central to a geothermal tourism that attracts more than 50,000 visitors per year.

The inauguration took place in an important year both for geothermal energy and for Tuscany. This year is the centenary of the construction of Larderello, the world's first geothermal power plant. One hundred years later, EGP manages 33 geothermal facilities totalling a capacity of 723 megawatts in the region. These plants meet 26.5 percent of the region's energy needs, and provide thermal energy for industrial activities in around 250,000 square metres of greenhouses and cheese and cured meat factories. Five local councils use geothermal heat for district heating.

The inauguration of the new museum comes at the end of a month in which EGP has been particularly active in the region, sponsoring the Road Cycling World Championships, which took place in Florence between 22-29 September.