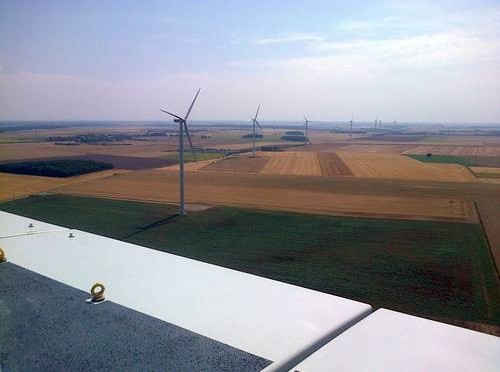 The project was developed and installed on a turn-key basis by Nordex and is already in operation.

Named “Chaussée de César Sud” because the turbines’ row underlines an ancient roman road, the wind farm is located in Central France near Bourges where Nordex has already installed turbines with an aggregate capacity of 135 MW.

“Chaussée de César Sud” comprises four N100/2500 multi-megawatt turbines, sufficient to supply up to 8,000 households with clean electricity (based on the consumption of 2,500 kWh per year).

“I am very pleased that we are able to continue our activities with Stadtwerke München. Also, it is good to see that our own project development business continues to deliver volume in France,” says Lars Bondo Krogsgaard, a member of Nordex SE’s management board.

Dr. Florian Bieberbach, CEO of SWM: “This is the second project that we have bought from Nordex in France. We have found an experienced partner in Nordex and we hope that there will be more joint projects to follow. In order to achieve our ambitious renewable energy goals we need dependable partners to rely on. And we have to think on the European scale and tap the full potential outside of Munich and Germany as well, like now in France. Here are very good wind sites and an appropriate support scheme.”

The Munich municipal utility Stadtwerke München (SWM) is one of the pioneers in renewable energies. It plans to produce sufficient green electricity using its own facilities to cover the entire requirements of the City of Munich – namely no less than some 7.5 billion kilowatt/hours – by 2025. In this way, Munich will be the world’s first major city to achieve this goal. To this end, SWM is concentrating solely on self-funding economical projects. This is why wind power, which is the most cost-efficient source of renewable energy, is playing a key role in SWM’s strategy.

About Nordex
As one of the technological leaders in multi-megawatt wind power systems, Nordex is benefiting from the trend in favour of large-scale turbines. The Generation Gamma range comprises the N90/2500, N100/2500 and the N117/2400, which is one of the most efficient onshore turbines. To date, over 2,400 of these turbines have been produced. This experience with multi-megawatt turbines gives Nordex a decisive lead over most of its competitors. With Generation Delta, Nordex is now offering the fourth generation of its proven multi-megawatt platform (N100/3300, N117/3000). Nordex has installed a total of around 5,500 turbines with an aggregate capacity of more than 9,000 MW all around the world. With exports accounting for more than 85 percent of its business, Nordex SE plays a key role in international high-growth regions. The Company has offices and subsidiaries in 22 countries around the world with a total global headcount of over 2,500 employees.

Stadtwerke München
Stadtwerke München (SWM), Munich’s municipal utilities company, is one of the largest energy and infrastructure companies in Germany. For decades, SWM has provided energy (electricity, natural gas, district heating) for the Bavarian capital in a safe and environmentally benign way. Furthermore, SWM supplies the megacity with fresh drinking water from the Bavarian Voralpenland and with 18 indoor and outdoor swimming pools they operate one of the most modern bathing environments in Germany. The MVG transport subsidiary is responsible for the underground, bus and tram systems and therefore a significant pillar in Munich’s public transport network. SWM employs around 7,500 staff and in the 2012 fiscal year turnover reached around 4.5 billion euros.