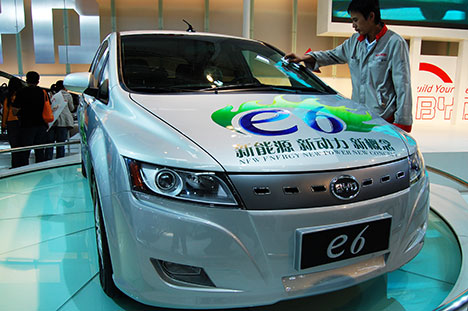 Subsidies will be provided to help promote new-energy vehicles from 2013 to 2015, the Ministry of Finance (MOF) said on Tuesday.

Manufacturers of pure electric automobiles, plug-in hybrid electric vehicles and fuel cell vehicles will be eligible for the subsidies, a ministry notice said.

Government organizations, public institutions and public transportation will be key targets for the new policy, the notice said.

The subsidy standards will be rated following basic price differences between new-energy automobiles and their traditional counterparts, but will decrease each year due to scale of production and technological progress.

Central financial authorities will also reward pilot cities with subsidies in proportion to their investment in building charging equipment.

The key target regions will be mega-cities or city clusters, as they are under heavy pressure to save energy and cut emissions, for example the Beijing-Tianjin-Hebei cluster, the Yangtze River Delta area and the Pearl River Delta region.

To be a pilot city or cluster, they must provide plans on how they will promote new-energy vehicles and apply to the four departments.