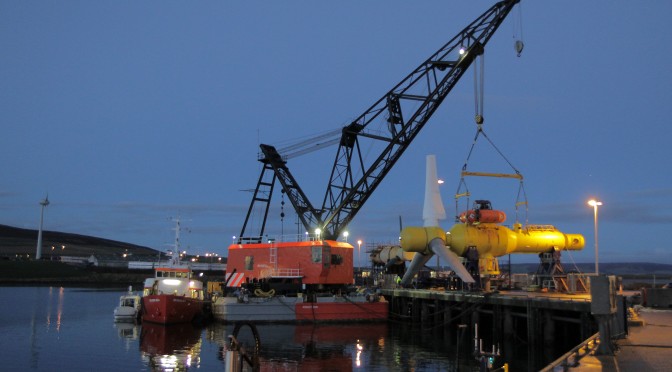 Alstom and ScottishPower Renewables have signed a Memorandum of Understanding to incorporate Alstom’s tidal power devices within the Sound of Islay project.

The tidal array, between the islands of Islay and Jura on the west coast of Scotland, will include up to four of Alstom’s 1 MW tidal devices, one of which is currently on test at the European Marine Energy Centre in Orkney. The new development is expected to result in the Sound of Islay project becoming the largest tidal array in the world capable of generating up 10 MW of electricity in total, when fully operational.

Simon Christian, UK Managing Director at Scottish Power Renewables said: “The addition of Alstom to the Islay project signals major benefits for the future growth of the tidal energy sector. Islay will now permit the two leading tidal power technologies to be proven side by side and to take them both to the point of commercialisation. This move further cements Islay’s credentials as the world’s leading marine energy project, and by ensuring that the two leading technologies are developed in Scottish waters it considerably strengthens Scotland’s global lead in this sector.“

The Islay programme remains on schedule for the first unit to be deployed in late 2015, with full site deployment during 2016. Operations are planned for 25 years and the demonstration project is anticipated to be the launch pad for future larger scale sites around the Scottish coast, with ScottishPower Renewables working on plans for a potential 95MW tidal project off the north coast of Caithness at Duncansby.

“We’re delighted to be working with Scottish Power Renewables on the Sound of Islay project which allows us to demonstrate the effectiveness of our technology, in Islay tidal environment. We believe the potential for tidal power in the UK is huge and, with our turbine, we have the ability to help our customers make the best of that potential.” stated Alstom Ocean business Vice-President Rob Stevenson

ScottishPower Renewables applied to Marine Scotland to build the Sound of Islay project In July 2010 and, after determination, consent was received in March 2011. The company is committed to working with its community partner, the Islay Energy Trust (IET), to maximise the social and economic benefits of the project for the local community. This includes identifying opportunities for local businesses and liaising with stakeholders to minimise impacts.

Alstom’s tidal turbine consists of a three-bladed, pitch-controlled rotor, with a diameter measuring 18 metres; a standard drive-train and power electronics inside the nacelle. The 22m long nacelle is installed onto a separate seabed-mounted foundation and weighs less than 150 tonnes.

This tidal stream turbine has a number of notable features: First, it is simple, and easy to transport. Its buoyancy means that it is easily installed and retrieved in a single tidal cycle using small vessels, reducing installation and maintenance costs. Secondly, it has an intelligent nacelle.

Thrusters rotate the nacelle to reflect the direction of the tide, managing ebb and flood tides seamlessly as well as maximising energy production. Thirdly, with its efficient blades, turbine blade pitching can be altered to control load on the turbine and optimise use of the tidal conditions locally.