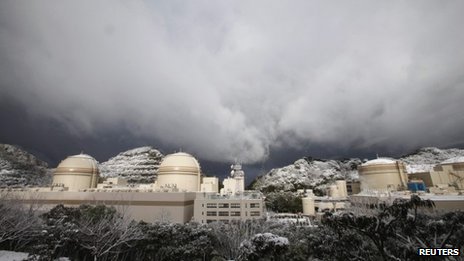 Japan is shutting down its last functioning nuclear reactor, with no timetable for a restart.

Reactor 4 at Ohi in western Japan will stop generating electricity in the early hours of Monday.

Analysts say Japan will be without nuclear power until December at the earliest, the longest shut-down since the 1960s.

The Japanese public turned against nuclear power after the meltdowns at the Fukushima plant in 2011.

Before the accident, which was caused by a massive earthquake and tsunami, nuclear plants supplied about 30% of Japan’s power.

But since then the plants have been closed, either for scheduled maintenance or because of safety fears, and have not been restarted.

Japan went without nuclear power during May and June last year, but operator Kepco was allowed to restart its reactors at Ohi.

The government has been under pressure to tighten safety standards to allay public fears.

Analysts say it will take around six months to clear all of the safety checks and legal hurdles involved in a restart.

So far, power companies have applied to restart about a dozen of Japan’s 50 reactors.

Prime Minister Shinzo Abe wants to see the reactors back on line, as they are a vital part of his plan to turn the economy around.

Since the Fukushima disaster, Japan has been forced to import huge amounts of coal, liquid natural gas and other fuels.

Mr Abe’s government blames these imports for the huge trade deficits posted by Japan since 2011.

The average household electricity bill has risen by 30% since Fukushima, denting the government’s attempts to boost consumer spending.

But continuing problems at the Fukushima plant have hampered the government’s attempts to win public support for a return to nuclear.

In the latest setback, operator Tokyo Electric Power Co (Tepco) said earlier this month that radiation levels had risen around tanks used to store water that has been flushed through the damaged reactor buildings.

Tepco had earlier said highly contaminated water had leaked from a storage tank.