According to the “2013 Geothermal Power: Internal Market Overview,” 70 countries are moving forward with nearly 700 projects, rocketing expected global geothermal capacity to reach 12,000MW by the end of 2013.

“There are so many projects moving forward that just a year or two ago were ideas on paper,” says Ben Matek, the report’s author. “This demonstrates how quickly the geothermal industry is growing internationally.”
Highlights of the report include: 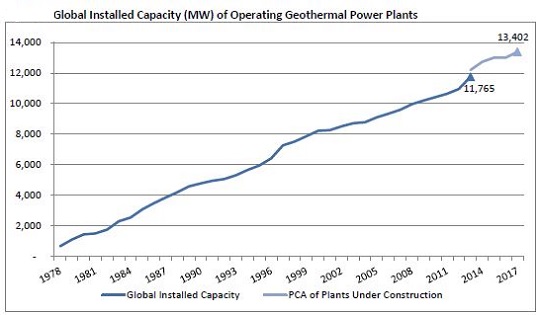 The report also covers a total of 21 countries and five continents. Some of the highlights include: 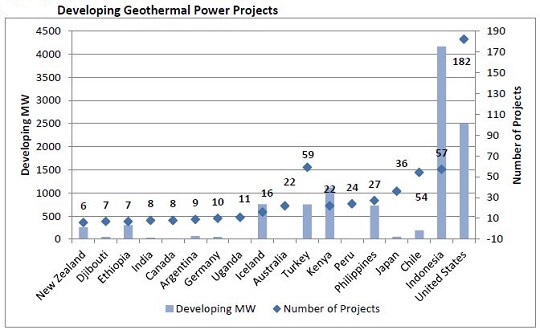 “In many developing economies there is a growing middle class driving a demand for affordable electrical capacity. In regions such as East Africa and Central America a lack of carbon based fuel resources lead to reliance on high cost/high CO2 emission imported fuel oil. Geothermal provides a preferred indigenous fuel source for a least cost baseload energy supply, providing the much needed increase in capacity. POWER Engineers/Galena Advisors is working in these regions to implement the lessons learned in the world geothermal industry with a goal of providing efficient and cost competitive power plants,” says Mike Long, Vice President, Galena Advisors.“The international markets are continuing to see robust growth and expansion. Established and emerging international markets including Africa, Turkey, Latin America, Indonesia, and the Philippines present a tremendous opportunity for the United States to export renewable technology, professional expertise, capital finance, and geothermal support services to the needs of this global industry,” adds Steve Hummel, director of renewable energy TAS Energy.  “These key foreign markets have played a significant role in TAS Energy’s growth over the past three years with our geothermal technology, and over the past 15 years with our turbine inlet chilling solutions.  We look forward to supporting the continued growth and helping the industry further expand to broader markets.”
http://santamarta-florez.blogspot.com.es/2013/09/geothermal-energy-projects-skyrocket.html