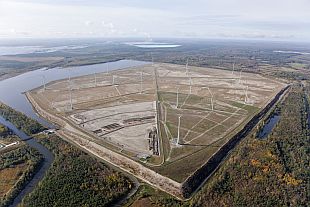 The Baltic Power Station ash depository was used for depositing oil shale ashes till 1987. The extensive work to close the depositary and cover the area with greenery started in 2005 with the help of the European Union Cohesion Fund.

“No valuable forest or field land was used to build the wind energy park, but oil shale ashes’ depositing grounds that were unused so far were utilised,” said Eesti Energia manager Sandor Liive.

There are 17 wind energy generators in the park. Each generator has electricity production capacity of 2.3 MW and the total capacity of the Narva wind energy park is 39.1 MW. The grounds are 40 higher than sea level.

The conduction of the park started in 2010, the main contractor was the German Enercon. In order to guarantee the stability of the generators, their foundations are on 14 poles that reach through the ashes into the land underneath. The weight of each generator with poles and foundation is 2,500 tonnes.