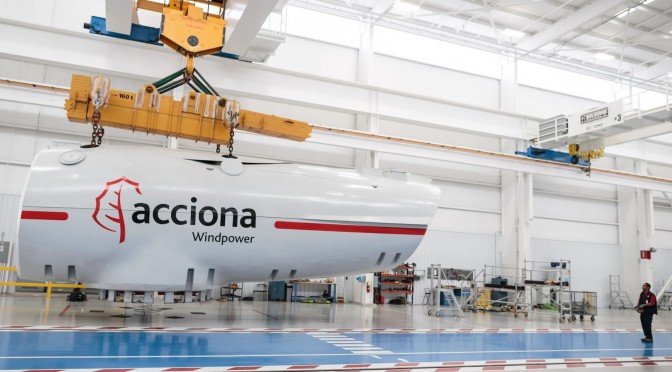 Towards the end of 2014 the company will put a 3-MW wind turbine assembly plant into service in the state of Bahia.

With this initiative, and others taken previously, ACCIONA will meet the local content rules established by Brazil to finance the acquisition of wind turbines by wind energy developers.

The new plant strengthens ACCIONA’s commitment to its industrial presence in Brazil, where it already has a wind turbine hub plant.

ACCIONA Windpower, an ACCIONA Group subsidiary dedicated to the manufacture and sale of wind turbines, will install an assembly plant for nacelles – the main component of a wind turbine – in the Brazilian state of Bahia. The announcement was made during the Brazil Windpower trade fair that opened today in Rio de Janeiro. The plant will be operational in the last quarter of 2014, and is intended to reinforce the company’s commitment to the wind power market in Brazil, one with the greatest potential on a global level.

The new facility is the company’s second industrial initiative in the state of Bahia, following the inauguration of a wind turbine hub plant at Sim