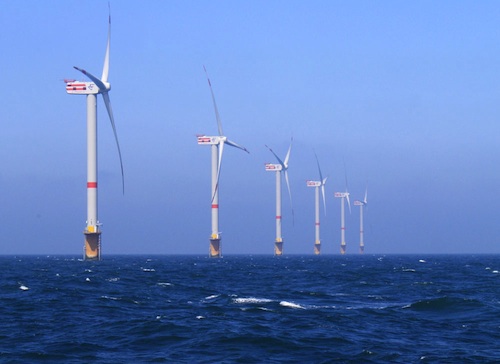 ABB, the leading power and automation technology group, has installed the world’s highest-voltage offshore converter station in the North Sea. Alternating current electricity generated in three wind farms off the coast of Germany will be converted on the platform into high-voltage direct current (HVDC) for transmission to the mainland.

The 320 kilovolts converter station has an 800 megawatt power transmission capacity making it the world’s most powerful installation of its kind.

In a three-day operation, the 9,300 metric tonne platform (topside) including the converter station was transported offshore by barge around 75 km off the German coast. It was then lifted by the world’s largest crane vessel Thialf and positioned on top of the already installed jacket.

“Putting such a huge platform in place is one of the most delicate operations in the delivery of an offshore transmission link, requiring  strong cooperation between the many stakeholders involved” said Brice Koch, Head of ABB’s Power Systems division. “This is an important project milestone in the delivery of this HVDC offshore wind connection and we are pleased it went smoothly.”

The DolWin 1 offshore wind connection is expected to avoid 3 million tonnes of carbon dioxide emissions per year by replacing fossil-fuel based generation.