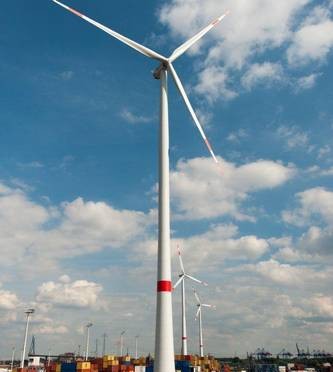 In the port of Hamburg, Germany, more and more wind power turbines are in operation, additionally solidifying the city’s vision of “smart port energy”.

The most recent example is the Nordex N117/2400, which today was officially put in operation by Hamburg Senator Frank Horch at the Eurogate container terminal in the district Waltershof.

“The new Nordex turbine is a beacon for the port – and not merely on account of its total height of almost 200 metres. Only by using energy more consciously and efficiently will we have an opportunity of reducing our dependence on fossil sources despite our ever growing energy requirements,” said Frank Horch. More and more industrial companies are generating their own power and many are using renewable power stations. In this respect, Eurogate is following current trends.

“Obviously, there is not enough space at the port for large wind farms but we do have a lot of experience in installing turbines in built-up industrial regions,” explained Jürgen Zeschky, the CEO of the turbine manufacturer Nordex, which has now built its third wind turbine at the port since 2010. Prior to this, the company had installed turbines at sensitive oil refineries as well as on the premises of a modern car production plant in Germany free of any disruptions to production operations.

Explained Zeschky: “In addition to cutting electricity consumption, our customers are concerned with efficient and clean energy production. And that’s where Nordex steps in.” For example in the district Waltershof in Hamburg: With a rotor diameter of 117 metres, the N117/2400 which has been installed in the port is one of the most efficient turbines for low-wind sites. It produces almost 20 percent more electricity than conventional turbines. In addition, Eurogate has opted for what by Northern German standards is the particularly tall 141-metre hybrid tower. And it had good reason to do this as the added height boosts yield by a further 20 percent. All told, Eurogate expects to achieve an annual energy yield of up to 8.7 million kilowatt/hours, sufficient to cover the electricity requirements of some 2,200 households. In this particular case, it will be supplying a substantial part of the power required by a large terminal.

The Hamburg city government is also committed to energy efficiency and with “smart port energy” will be making greater use of a local source of power, namely the wind. There are plans to install up to a further seven turbines. One of these will be a Nordex N117/3000, which will be located at the Köhlbrandhöft site, making it the fourth Nordex multi-megawatt turbine to go on line at the port of Hamburg in quick succession.