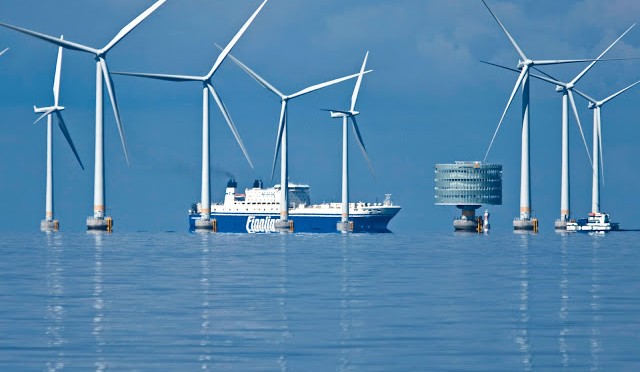 Gwynt y Môr Offshore Wind Farm has passed a major construction milestone with the completion of the first 100 full foundations at the 160 wind turbine locations in Liverpool Bay.

In addition, the last two steel monopiles left Gwynt y Môr’s base harbour port facility at Birkenhead this afternoon (Friday 9th August) for installation in the next few days.

Two vessels, the Friedrich Ernestine and the Stanislav Yudin, are carrying out foundation installation works more than eight miles off the North Wales coast in Liverpool Bay.

RWE npower renewables’ Gwynt y Môr Project Director, Toby Edmonds, said:
“The installation of 100 complete foundations is a significant milestone for the wind farm project which, once fully operational, will supply clean green energy to up to 400,000 homes(1) – around a third of the total number of homes in all of Wales(2).

“All of the 160 wind turbines require a bespoke foundation so each has been individually fabricated to fit the seabed conditions and water depth at each location. Foundation installation activity will continue in Liverpool Bay into next year.”

Wind turbine foundations are made up of two major components; a monopile – a long steel tube – and a yellow transition piece which connects the monopile to the wind turbine. In recent weeks both the longest monopile, measuring 64 metres and the heaviest at 708 tonnes, have been installed offshore in Liverpool Bay.

50 wind turbines are now in place and all four export cables laid between the beach at Pensarn, near Abergele and the two offshore substations. In addition the east substation has been successfully energised in preparation for first generation.

RWE npower renewables has set up a project information line which people can call if they have a query about the construction of Gwynt y Môr.