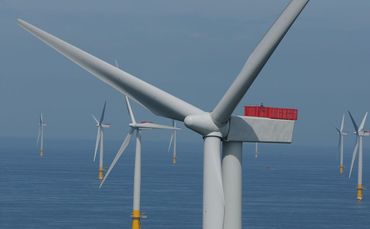 The UK has today further cemented its position as the world’s leading offshore wind energy market with the official opening of the £1.3bn Greater Gabbard project off the coast of Suffolk.

140 wind turbines in water depths between 24 and 34 metres and with an installed capacity of 500 megawatts (MW): Greater Gabbard is one of the largest wind farms in the UK. At today’s opening ceremony, the joint venture partners RWE Innogy and SSE inaugurate the power plant together with Michael Fallon, Minister of State for Energy. Greater Gabbard is located 23 kilometres off the coast of Suffolk, over an area of 147 square kilometres. The 3.6 MW wind turbines are producing enough climate-friendly electricity to supply around 530,000 households.

An investment volume of £1.6 billion and over eight million working hours were spent developing and constructing the project. Around 100 new jobs have been created at the operations and maintenance base at Lowestoft. With this, Greater Gabbard cements the UK’s reputation as one of the world-leaders in the offshore renewables sector. Furthermore, the wind park is supporting the local economy.

Construction of Greater Gabbard commenced in 2008 and was completed in September 2012. Dr Hans Bünting, CEO of RWE Innogy, explained: “An incredible amount of partnership working, innovation and hard work has resulted in the successful completion of Greater Gabbard. Offshore and onshore wind technologies are a perfect match for the future energy mix in Europe. Now is the time to set the course for offshore wind in Europe for the next investment period, especially in the UK and Germany, the major growth markets for offshore wind in the EU.”

“The last ten years has seen substantial progress in both the number and scale of offshore wind farm developments. Greater Gabbard has been a pioneering project during this period and can proudly take its place as a major milestone in the development of the UK offshore wind industry. For many years it was the largest wind farm under development world-wide and was the first to be sited more than 12 miles offshore. It continues to be the furthest from the shore and in the deepest water of any UK offshore wind asset. The success offshore brings onshore benefits to local people, businesses and the wider economy,” added Alistair Phillips-Davies, SSE Chief Executive.

RWE Innogy is currently building two further offshore wind power plants in Europe. The Nordsee Ost (NSO) offshore wind farm is located around 35 kilometres to the north-east of the island Helgoland in the German North Sea region. With a total output of around 295 MW NSO will be able to provide approximately 295,000 German households with climate-friendly electricity. 24 of the 48 foundations for the wind turbines have been successfully installed. This week, RWE Innogy has started laying the first inter array cable in the construction area.

Gwynt y Môr is being built in Liverpool Bay, off the North Wales coast. At 576 MW, the power plant is RWE’s largest offshore wind farm currently in construction. It is a shared investment between partners RWE Innogy (60%), Stadtwerke München (30%) and Siemens (10%).

Energy and Business Minister Michael Fallon cut the ribbon on the new facility at a ceremony in Lowestoft today, hailing the project as further evidence of the government’s commitment to the fast-expanding offshore wind industry.

Fallon hailed the opening as a “big day for Suffolk”. “This is already a huge project with 140 turbines, if you consider that there are around a 1,000 in the UK this one site is providing 14 per cent of our offshore wind power capacity,” he said. “The offshore wind industry is getting bigger and bigger.”

The 500MW Greater Gabbard project is now expected to provide an average of 1,750GWh of electricity a year, delivering enough power to the grid for 415,000 homes, exceeding the domestic electricity demand of the whole of Suffolk. The project is also expected to double in size when the planned Galloper wind farm extension is completed in 2017.

Alistair Phillips-Davies, SSE chief executive, said the project represented a technical breakthrough for the fast-expanding industry. “For many years it was the largest wind farm under development world-wide and was the first to be sited more than 12 miles offshore,” he said. “It continues to be the furthest from the shore and in the deepest water of any UK offshore wind asset.”

Fallon said the project had already delivered substantial economic benefits to the region, creating hundreds of jobs and supporting a £150,000 fund to support local initiatives.

He also argued that British firms had benefited from the project, including Great Yarmouth-based Seajacks, which specialises in the development and operation of dedicated vessels for offshore wind turbine deployment and maintenance.

“Seajacks is supporting 200 jobs and is now winning export business,” he said. “The company is helping to install wind turbines in German waters. It is creating British jobs, driving British investment, and securing exports.”

The government has faced criticism over the extent to which foreign companies have supplied the turbines for the UK’s offshore wind farms and led the development of new projects. The industry has repeatedly warned that without stronger reassurances that the market will continue to develop post 2020 manufacturers will remain reluctant to locate manufacturing plants in the UK, arguing that the government should introduce a decarbonisation target for the power sector for 2030 and sign up to post-2020 EU renewables targets.

Dr Hans Bünting, chief executive of RWE Innogy, said the onus was now on governments to further clarify the policy environment for the sector. “Now is the time to set the course for offshore wind in Europe for the next investment period, especially in the UK and Germany, the major growth markets for offshore wind in the EU,” he said in a statement.

But ministers maintain there are hundreds of UK firms already operating in the industry’s supply chain and last week launched a new Offshore Wind Industrial Strategy designed to ensure British firms gain a significant share of the market.

They have also stressed that the combination of the UK’s Climate Change Act and an Energy Bill that will enable guaranteed prices for low carbon energy generators provides developers with significant policy certainty through to 2020 and beyond.

“Greater Gabbard alone has already brought half a billion pounds of new investment to companies across the UK,” he added. “This opportunity is here and now, and UK companies are rightly seizing the chance to become part of the burgeoning offshore wind supply chain.”

“As part of the overall Environmental Impact Assessment, First Flight Wind is undertaking a suite of surveys within the Wind Resource Zone,” said Dr Carolyn Heeps, project development manager at First Flight Wind, a joint venture involving B9 Energy, DONG Energy and Renewable Energy Systems. “The boat-based surveys which Natural Power is carrying out play a crucial role in building a comprehensive picture of the existing environment, and will help us assess the potential impacts of the proposed offshore wind farm.”