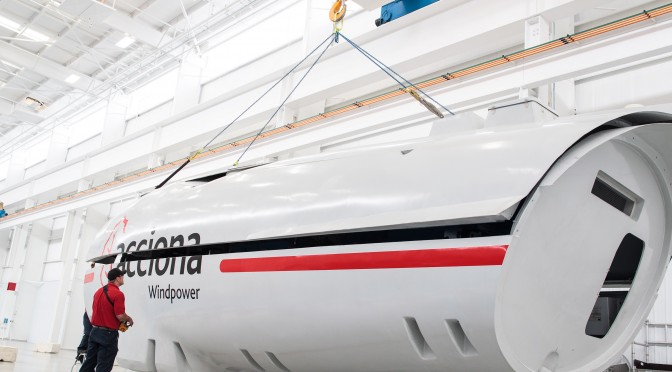 Changes to renewable energy regulation in Spain led to a 43.2% fall in the energy division’s pre-tax profit to €58 million

ACCIONA ended the first half of 2013 with an attributable net profit of €48 million, 40.2% less than the €80 million registered between January and June 2012.

The fall in net profit was mainly due to changes to the Spanish regulatory regime for renewables – namely the Law 15/2012 of December 27th, and the Royal Decree Law 2/2013 of February 1st – which cut net average wind prices by 11.6% in the first half of the year, compared with the same period in 2012. As a result, the energy division’s pre-tax profit fell 43.2% to €58 million despite a 12.2% increase in wind production in Spain during the period, and a 69.8% rise in hydroelectric output. Another factor affecting first-half results was a 74.1% drop in the earnings before tax of ACCIONA’s infrastructure division, due to the slowdown of construction in Spain.

Ordinary capital expenditure came to €226 million, a 33.8% drop compared to the same period in 2012. Infrastructure (€118 million, mainly concessions) and Energy (€95 million) concentrated investments in the first half of 2013.

Lower investment outlays and the impact of the market value of debt hedging derivatives brought a drop in the Group’s net financial debt, which came to €7.42 billion, 0.8% lower than at December 2012. The gearing ratio of 136% at end-June 2013 remained unchanged since December. Understandably, ACCIONA’s first-half results do not reflect the impact of the Royal Decree Law 9/2013 of July 12th, which came into effect on July 14th, the economic impact of which is still not possible to ascertain.

Revenues rose as a result of a 243MW increase in installed capacity over the past twelve months, as well as the higher wind and hydraulic load factors in Spain. This growth in capacity and load factors only partially offset the impact of recent regulatory changes in Spain, which brought about a 43.2% drop in the division’s EBT to €58 million.

ACCIONA Infrastructure revenues fell 15.5% to €1.333 billion, mainly because of a construction slowdown in Spain, while EBITDA came to €64 million (a 17.3% fall).

EBITDA for the concessions business fell by 6.6%, to €24 million. This was the result of a number of factors, such as the sale of the San Luis de Potosí University (Mexico) in 3Q12, which generated an EBITDA of €3.1 million during the first half of 2012. Earnings before tax fell to €11 million, 74.1% less than in the same period of last year.

The water backlog amounted to €11.155 billion, 132% higher than in June 2012, as a result of the incorporation of an O&M contract with ATLL in Catalonia.

The newly-created ACCIONA Service-a division that brings together a number of activities, such as airport handling services, facility services, logistics, waste management, and others-closed the first half of the year with €295 million in revenues (up 6%) and a two-fold rise in EBITDA to €7 million, thanks mainly to a strong performance of facility services.

In Other Activities, which includes Trasmediterranea, ACCIONA Real Estate, Bestinver, wineries and others, first half revenues were €282 million, 4.6% lower than a year ago. However, this group of companies registered a significant increase in EBITDA to €23 million, which was 63.2% higher than the same period of last year thanks to a good performance by Trasmediterranea and Bestinver. On June 30th 2013, Bestinver held €6.84 billion of assets under management, a 31.1% increase on June 2012.