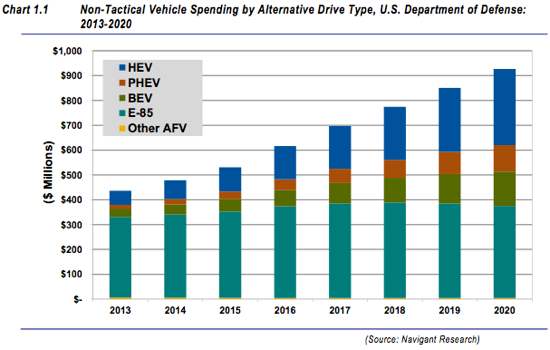 US military spending on alternative-drive vehicles for the non-tactical fleet will increase from more than $435 million in 2013 to $926 million by 2020, Navigant Research forecasts.

This includes hybrid electric vehicles (HEVs), plug-in electric vehicles (PEVs) and ethanol-powered vehicles, as well as vehicle-to-grid (V2G) technology.
A majority of the growth will be made through spending on HEVs and PEVs, the report says.
The US military is the largest single consumer of energy and fossil fuels on the planet. Estimates place the total energy consumption of the Department of Defense to be on par with the state of Oregon and greater than two-thirds of all countries.
To capture the economic, environmental and strategic benefits offered by alternative fuels, the military is investing heavily in various types of alternative drive vehicles. Some 55 percent of the military fleet can run on alternative fuels, Navigant Research says. However, according to the US General Services Administration, gasoline accounts for about 70 percent of the non-tactical fleet