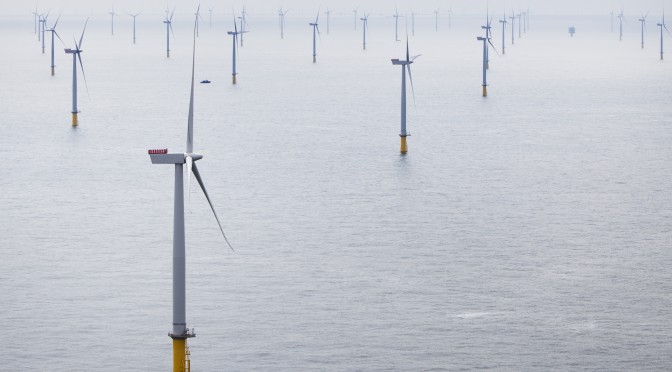 British Prime Minister David Cameron was among the dignitaries present at the inauguration of the 630 MW London Array last week.

“London Array shows you can build large-scale renewable energy projects right here in Britain,” Cameron told more than 350 people gathered in Margate, Kent. “This is because when it comes to clean energy, the UK has one of the clearest investment climates globally.”

The London Array’s 175 Siemens 3.6 MW turbines are expected to produce enough electricity to power over half a million homes annually. DONG Energy owns 50% of the wind farm project, E.ON has a 30% share and Masdar owns 20%. The wind farm is expected to save 900,000 tonnes of carbon dioxide emissions annually.

If Phase Two of the London Array goes ahead, its 65 turbines will generate 240 additional MW, bringing the total for both phases to 870 MW.

News of the official opening garnered much interest in the media — including Reuters, the Independent and the Guardian — and on various websites.

Nonetheless, the UK government has put its offshore wind sector at risk by lowering its offshore target from 18 GW to just 11.5 GW by 2020, found a think tank recently. This means the UK is unlikely to meet its emissions targets say the government’s climate change advisers.

In the coming days EWEA will release its mid-year offshore statistics for 2013, which will show much the sector has grown in the last six months, and which countries are leading.

Offshore growth and the need for ambitious targets – along with all the most pressing technology, financing and political questions – will all be discussed at the EWEA OFFSHORE 2013 event in Frankfurt in November.

From careers in the offshore wind sector to supply chains, to cost-cutting to financing, the conference will offer attendees an efficient and sophisticated way to learn about the growing industry.