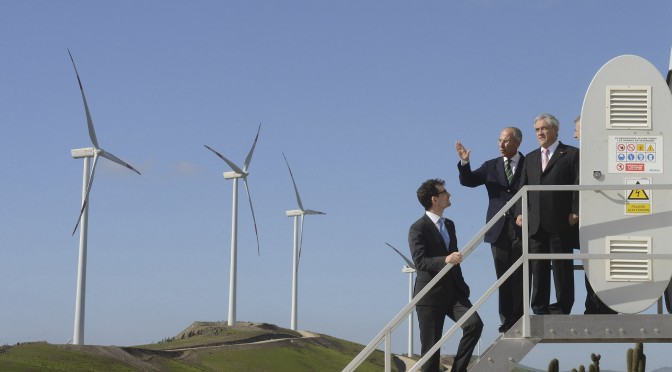 The Talinay wind farm, which can generate more than 200 GWh per year and has a capacity of 90MW, was inaugurated in the presence of Chile President Sebastián Piñera and Enel Green Power CEO Francesco Starace.

The Talinay wind farm in the region of Coquimbo in Chile was put into service on Thursday, making it Enel Green Power’s first wind farm in the South American country.
The inauguration of the facility saw the presence of representatives from Chile’s highest level of public office, including its President Sebastián Piñera, its Energy Minister Jorge Bunster and the Governor of the Region of Coquimbo, Mario Burlé. Enel Green Power was represented by its CEO Francesco Starace and the Country Manager for the Andes Area Salvatore Bernabei.
‘The Talinay wind farm confirms the Group’s strategy, which aims for technological diversification and at strengthening its presence not only in Chile, but in the whole Latin American region,’ said Starace.
The construction of the new plant, which has an installed capacity of 90 megawatts, can generate more than 200 gigawatt-hours per year and saves 165,000 tonnes of carbon dioxide emissions per year, required an investment of some $165 million.
By putting Talinay into service, EGP strengthens its presence in Chile’s promising renewable energy market. It was already operating in the Latin American country with the 51.4MW Pullinque and 40.8MW Pilimaiquen hydropower plants, and Talinay brings its installed capacity up to 182MW.
In the region of Antofagasta, Enel Green Power has also started building the 90MW Valle de Los Vientos wind farm, while after having obtained the environmental permit for the construction of the Cerro Pabellón plant, EGP will build the first geothermal power facility in the whole of South America in the Atacama desert, at a height of 4600 metres above sea level.
Wind energy in Chile
http://santamarta-florez.blogspot.com.es/2013/06/enel-green-power-opens-talinay-wind.html