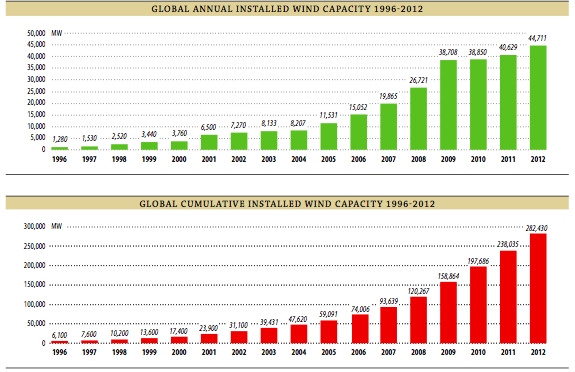 As Brazil, China, Mexico and South Africa add wind turbines, the figure represents modest growth compared with a year ago, when the overall total capacity was just over 280 gigawatts.

“Worldwide installed wind power will exceed 300 gigawatts of power capacity this year,” Peter Sennekamp, media officer for the European Wind Energy Association (EWEA), said, citing figures compiled by EWEA and the Global Wind Energy Council.
Europe, which has led the world on wind energy, still represents around a third of all capacity, with more than 100 gigawatts, but its growth has been stalled by uncertainty as financial crisis has meant abrupt changes to subsidy regimes.
Heavy industry has attacked renewable subsidies, arguing they add to costs and damage competitiveness, especially when the United States benefits from cheap shale gas.
Representatives of the renewable industry say they are working to produce energy that can compete economically with traditional sources, which would lower political risk.
They say they have made progress on onshore wind and solar, but for the huge scale of offshore wind, a technology still in its infancy, subsidies are essential, probably for the rest of the decade.
“We see six to seven offshore wind farm projects under way and then there’s nothing. There’s no decision taken by investors,” Joerg Buddenberg, CEO EWE Vertrieb, part of Germany’s EWE Group, told referring to the German market.
Wind energy executives note conventional fuel sources have long benefited from support in the form of tax breaks for oil and gas and government help in disposing of spent nuclear fuel.