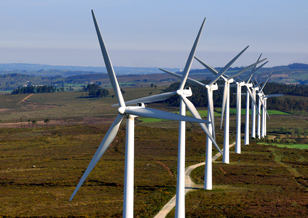 Wind power is an essential part of Enel Green Power’s growth strategy, with its total installed capacity destined to reach 7.2 gigawatts by 2017 and a number of agreements being reached around the globe.

Global Wind Day, an event promoted by the EWEA and the GWEC to raise awareness of wind power among the general public in the 75 countries in which it is used through conferences, celebrations and visits to wind farms. Wind power sector is an essential part of Enel’s growth strategy, with EGP currently operating at 4931 megawatts of wind power capacity, accounting for 54 percent of the Group’s installed capacity. It is aiming to increase that to 7.2 gigawatts by 2017.

Over the last few months, Enel Green Power’s wind power operations have seen some success, with the opening of construction sites, the signing of new agreements, attraction of financing and plants being put into service around the world.

In March, EGP España connected to the grid Angosturas and Madroñales, two new wind farms in the province of Malaga that have a combined installed capacity of 70MW, while in May the 13.5 MW Ampliación Sierra del Cortado wind farm was put online in Almenar de Soria in the autonomous community of Castilla y León.

In April EGP won a public tender organised by the Chilean Ministry of National Assets for a wind farm called Sierra Gorda Este, in which EGP won the exclusive right to develop, build and manage up to 130MW of wind capacity. The previous month the Talinay 90MW wind farm was connected to the grid, while the 90MW Valle de los Vientos facility in the region of Antofagasta is being built; once completed, EGP’s wind power capacity in Chile will be 272MW.

In May EGP started the construction of the Curva dos Ventos, Fontes dos Ventos and Modelo wind farms in the Brazilian states of Bahia, Pernambuco and Rio Grande do Norte, in the country’s north-east. These new plants will add about 193MW to EGP’s installed capacity in Brazil.

The Group has also reached commercial agreements and be awarded funding, with one example being the equity partnership agreement between EGP North America and GE Capital subsidiary EFS Buffalo Dunes for the development of the Buffalo Dunes wind farm, as is the agreement to purchase an additional 26 percent of class A shares of the Chisholm View Wind Project from another subsidiary of GE Capital, EFS Chisholm LLC. Through its subsidiary Enel Latin America (Chile) Ltda, the Group also secured US$100million of funding from the Banco Bilbao Vizcaya Argentaria Chile (BBVA) that will be used to partially cover the investments planned over the next few years.