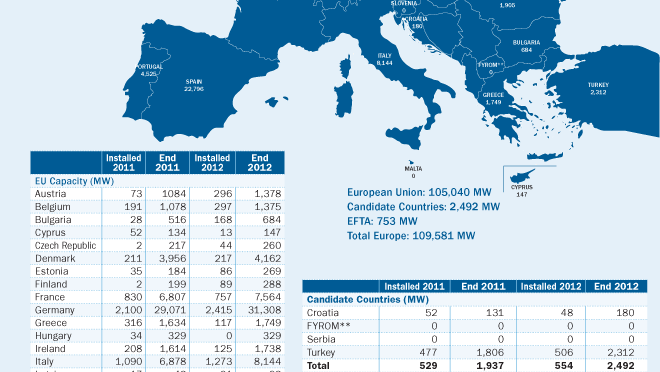 Europe’s transmission grid capacity can be used more efficiently, bringing far more power online, the EU-funded TWENTIES project has found. By, measuring power lines’ temperature in real time rather than theoretically, for example, 10% more power can be put on the transmission and distribution grids.
Moreover, deploying TWENTIES technologies could reduce power prices in the German system by 2.2%, marginal electricity prices by up to 0.4% and cut carbon emissions by 3.5% by putting wind turbines together with other power generation in a ‘virtual power plant’.

TWENTIES also showed that using ‘high wind ride through’ control meant turbines continued producing electricity at wind speeds of up to 32 metres per second rather than 25 – a 28% increase in output. It cut reserve requirements in half and reduced power system instability.

Other breakthroughs of the project – whose final publication will be launched tomorrow at a meeting in Brussels – included the successful testing of a DC circuit breaker prototype.

“Not only did this project take major technical steps forward, it also brought the wind industry and transmission system operators together in a successful collaboration, showing how wind energy can provide essential services to the grid”, commented Vicente Gonz