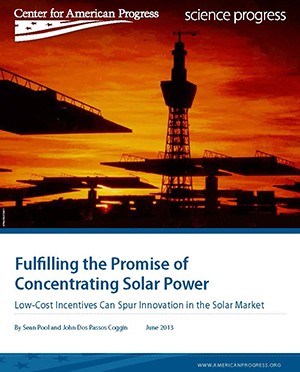 Concentrating solar power—also known as concentrated solar power, concentrated solar thermal, and CSP—is a cost-effective way to produce electricity while reducing our dependence on foreign oil, improving domestic energy-price stability, reducing carbon emissions, cleaning our air, promoting economic growth, and creating jobs. One physicist has even touted it as the “technology that will save humanity.”
Grandiose claims aside, concentrating solar power has recently garnered the attention of the U.S. Department of Energy. The agency has created the SunShot Initiative to lead research into the technology—work that aims to increase efficiency, lower costs, and deliver more reliable performance from concentrating solar power. Additionally, high-profile U.S.-based companies such as IBM have invested in CSP research. Increasingly, private and public stakeholders believe that the technology holds the greatest potential to harness the power of the sun to meet national sustainability goals.
As the White House prepares a climate-change-reform agenda that embodies the bold spirit of this year’s State of the Union address, in which President Barack Obama emphasized executive authority to regulate greenhouse gases, Congress has begun debating the nation’s new energy future. Concentrating solar power should be a key component of this dialogue.
Some are concerned that clean technologies are too immature and unreliable to produce the vast stores of affordable baseload energy needed to power the 21st century American economy. Others are worried that the nation cannot switch to carbon-free electricity without ruining the economy. CSP technology, however, presents a compelling response to each of these concerns.
In this report they detail why the United States should invest in concentrating solar power and delineate the market and regulatory challenges to the innovation and deployment of CSP technology. We also offer the following low-cost policy solutions that can reduce risk, promote investment, and drive innovation in the CSP industry:
http://www.helioscsp.com/noticia.php?id_not=1841
http://www.americanprogress.org/wp-content/uploads/2013/06/PoolSolarPower-report-2.pdf
http://santamarta-florez.blogspot.com.es/2013/06/the-promise-of-concentrated-solar-power.html