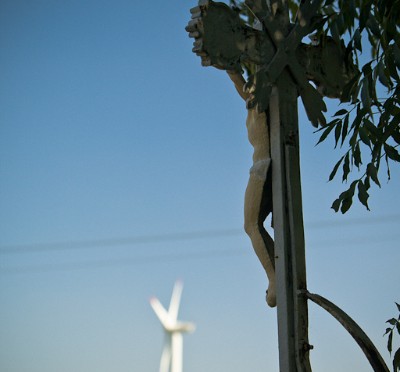 Mr. Juriga looks on the icon of Saint Elias. The wind turbine was named after Saint Elias, a prophet because Mr. Juriga believes that wind energy is prophetic in our need for a clean energy world. Mr. Juriga was an outspoken anti-communist in his youth (he learned English from textbooks to escape communism) Mr. Jurigaâ??s faith led him to join the Orthodox church and to study theology at a time when anti-communists were prohibited from studying. 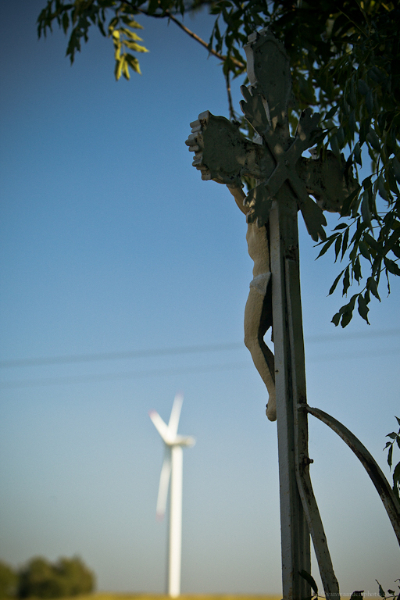 His vision to create a renewable energy future for the church and community of Vilemov was realised through the support of the church. Mr. Juriga is currently the director of the Orthodox Academy, an institute that helps educate school kids about clean energy in Czech Republic. The Academy runs solar, wind and hydro installations and is supported by the revenue generated from the wind energy. He strongly believes that community involvement and small-scale energy production is essential to the development of a post carbon world. Unfortunately, the system in the Czech Republic and Slovakia is heavily tilted in favour of large energy producers. The process is buried in bureaucracy and controlled by industry heavy weights, meaning it is tough for independent producers or communities to raise the funds and/or complete the process. 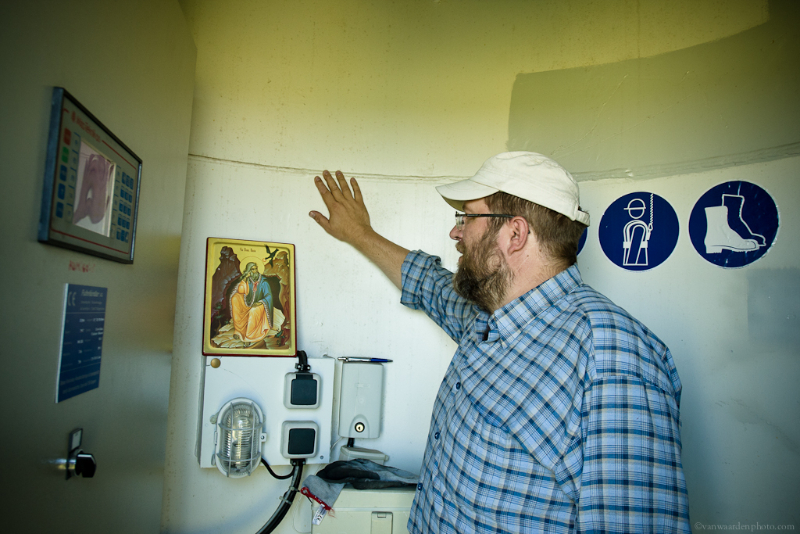 High on a wind turbine, hidden amongst the cherry orchards and the wheat fields of Eastern Czech Republic, is a painting of a raven with a piece of bread in its mouth. The prophet St. Elias the Tishbite was kept alive by ravens feeding him bread when he was hidden in the desert. This is the St. Elias wind turbine and it belongs to the Pravoslavná Akademie Vilémov, a non-profit Orthodox NGO specialised in renewable energy.

“Everything was given to us by God to survive,’ says Roman Juriga, director of the Akademie, “that includes the energy and the capacity to create energy, that is why we have named our turbine St. Elias.”

Roman Juriga is a devout member of the Orthodox Church of the Czech Lands and Slovakia. He grew up in communist Czechoslovakia as an atheist as ordered by state decree. Outspoken and anti-communist, secretly he studied English, and secured entrance to an international English school. Joining the Orthodox Church, he was encouraged by leaders to attend University to study theology. He objected: the government knew he was anti-communist and if they discovered him studying, he would be thrown out. The Church offered its protection. Luckily, just as the authorities got wind of his studying, the 1989 Velvet Revolution happened and communism in Czechoslovakia disintegrated.

After successfully completing his education, Juriga established the Akademie, with the support of the church and Orthodox Monastery, in the little village of Vilemov. Through small scale solar, wind, and hydro power, the Akademie educates children and adults about renewable energy and climate change. The reaction has been incredibly positive from all groups, especially the secondary school students. Many of them say that the information provided by the Akademie disagrees with the information provided to the schools by the Temelin Nuclear Plant. They say that the nuclear industry refers to renewables as unsafe, expensive and unimportant. Juriga likes to point out that on his tour guests visit the actual installations, whereas at the nuclear plant guests only visit the presentation centre for safety reasons.

Members of the Monastery and village are very proud of their renewable energy. Additionally, several new solar thermal installations that were inspired by the Akademie have sprung up in the community. The Akademie offers free consultancy on renewable energy for other churches and church-related NGOs. All this is made possible from the revenue from the 100kW St. Elias turbine.

Juriga has been instrumental in shining some light on the complicated world of clean energy bureaucracy in the Czech Republic. The approval process for small energy production is very difficult to navigate. Complicated submission procedures and reams of paper work protect the vested interests of fossil fuels, politicians and corporations. Juriga has become something of an expert in negotiating the submissions process and his successes have become examples and inspirations for others across the Czech Republic.

Wind energy in the Czech Republic is lagging compared to Western Europe. However, Juriga believes that it is a natural progression for a church to move in the direction of small-scale energy production and that it is essential to the development of a post-carbon world. He also believes that as the Czechs look to Germany and see the rapid deployment of renewable energy, the future will look different in the Czech Republic.