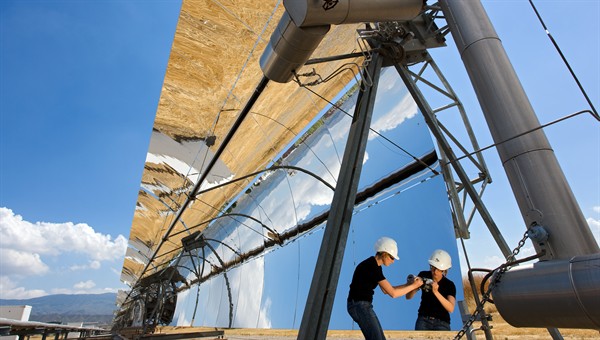 The long-term objective for this new centre is the development of a competitive solar power industry in Morocco. The project is part of the Moroccan Solar Plan, which envisages having solar power stations capable of generating 2000 megawatts by 2020. The project is partially funded by the German Government and implemented by the Deutsche Gesellschaft für Internationale Zusammenarbeit (GIZ) GmbH. In a country that enjoys long duration of sunshine hours and high irradiation like Morocco, solar power stations have the potential to provide a significant proportion of national power requirements.

The Moroccan town of Ouarzazate is a potential location for this solar research and test centre. Construction work on the first solar power station started at this location in May 2013 as part of the Moroccan Solar Plan. This will be a parabolic trough power plant with a capacity of 160 megawatts. By 2015 this capacity will be increased to 500 megawatts and the complex will then include a solar tower and a photovoltaic power plant. The DLR Institute of Solar Research is now developing a concept for a test centre in which pilot and demonstration scale plants will be tested and evaluated, and also in which research and development work can be conducted towards efficient, cost-effective solar power stations to supply electrical power as well as desalination plants in Morocco.

Furthermore, DLR researchers on this project are also evaluating the potential added value of Concentrated Solar Power (CSP) and Photovoltaic (PV) technology to Moroccan industry. Therefore, training and further education in the construction and operation of solar power stations will also be a priority. Mustapha Bakkoury, the President of Masen, is placing emphasis on the build-up of research expertise in Morocco: “With the Moroccan Solar Plan, our country has sent out a clear signal about the development of solar energy. We are delighted to be able to rely on DLR’s expertise as we set up the Solar Research and Test Centre. This initiative will enable us to further intensify cooperation between European and North African researchers and support the development of a competitive solar industry in our country.”

Experience in setting up research centres

Through many years of cooperation with its Spanish partner, CIEMAT, DLR has gained important experience through the joint construction and operation of the Plataforma Solar in Alméria. In addition, DLR has been building up its own research and testing infrastructure for many years, examples being the solar furnace in Cologne and the DLR solar tower in Jülich. “By virtue of our many years of research activity at the Plataforma Solar de Almería and our own facilities, we are familiar with the current status of research and development, as well as the infrastructure required for successful projects. DLR has an extensive network as a result of its numerous collaborative projects with partners from Morocco and other countries in northern Africa, in industry as well as in the research sector,” said Peter Heller, Head of the Qualification Department at the DLR Institute of Solar Research at the Almería site. “In the further education sector, we can draw upon the capacity building programme, ‘enerMena’, developed here at DLR.”

Electrical power around the clock

The DLR Institute of Solar Research is working on technologies for solar power stations, specifically in relation to Concentrated Solar Power (CSP. This technology involves the use of mirrors to concentrate solar radiation onto a point (tower power plant) or a line (parabolic trough power plant). The thermal energy collected here is then used to generate electricity in the same way as in a conventional steam power station. These power stations can generate between five and 250 megawatts of controllable, renewable electrical power. The thermal energy collected has an advantage over other renewable energies in that it is easy to store. This also means that these solar power plants can deliver electrical power around the clock, for example in the evening after the sun has set, and typically a time of peak consumer demand.

Masen (Moroccan Agency for Solar Energy), which was effectively set up in March 2010, is a limited company with public funding, and which was created by Law no. 57-09 for the implementation of the integrated Moroccan Solar plan and the promotion of solar resources in every aspect. Masen has three main missions: to develop solar power plants, contribute to the development of a national expertise, and be a force of proposition on the regional and international plans.

The Deutsche Gesellschaft für Internationale Zusammenarbeit (GIZ) is Germany’s assistance Agency through its project ‘GIZ Accompaniment of the Moroccan Solar Plan (GIZ APSM)’, which focuses on supporting industrial activities in Morocco’s nascent solar energy sector. GIZ provides technical assistance, which has been mandated by German Ministries to support Morocco in reaching development indicators. GIZ is active in Morocco since 1975. Its mission focuses on providing support for sustainable economic development and land use, the management of water resources, as well as the environment and climate change, including the promotion of renewable energy sources. GIZ projects are commissioned by the German Federal Ministry for Economic Cooperation and Development (BMZ), the Federal Ministry for the Environment, Nature Conservation and Nuclear Safety (BMU) the Federal Ministry of Defense, the Federal Ministry of Economics and Technology, the Federal Ministry of Education and Research and other international institutions.