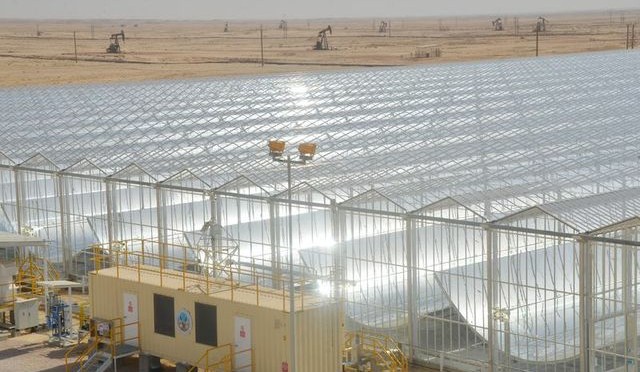 Similar facilities have been gathering sunlight in the Southern California desert for years, using the focused light to generate electricity.

In Oman, however, the facility generates steam. Pipes shunt the steam underground, where it coaxes heavy oil from the rocks.

“PDO has successfully extended the life of its heavy oil assets by deploying innovative EOR technologies over the past few decades,” said Raoul Restucci, Managing Director of PDO. “The GlassPoint system is proving it can reliably fuel thermal EOR with solar power while reducing the need to burn natural gas. This solar EOR solution provides for an economically viable and environmentally sustainable long term resource to develop Oman’s heavy oil portfolio, while saving valuable natural gas resources for use in other gas-dependent industries.” 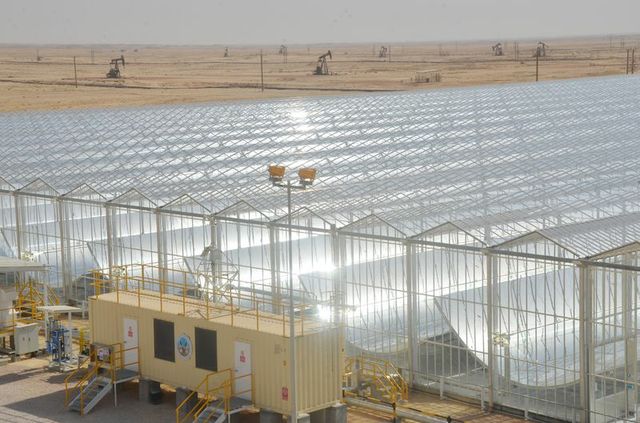 Today, EOR applications account for a significant portion of Oman’s annual natural gas consumption. By incorporating solar steam, PDO can significantly reduce the amount of natural gas it burns to produce steam for EOR. GlassPoint’s solution can cut natural gas used for EOR by up to 80 percent, helping Oman release its natural gas resources for higher value applications such as power generation, desalination, industrial development or export as LNG.

“GlassPoint is committed to generating in-country value by partnering with local contractors and manufacturers,” added MacGregor. “More than 40 percent of the solar installation was fabricated and constructed with the help of Omani companies, and we plan to increase the percentage of local content significantly as we grow throughout the country and region.”
Construction on the project began in January 2012 and finished in December 2012. The project was completed on time, on budget and with no Lost Time Injuries in accordance with GlassPoint and PDO’s shared commitment to sound engineering execution and health, safety, security and environment leadership. The Amal project is 27 times larger than GlassPoint’s solar EOR system, installed at Berry Petroleum’s 21Z oilfield in Kern County, California, USA, which has been in daily operation for two years. For a video of the project, visit http://www.glasspoint.com/solar-eor-projects/petroleum-development-oman/.