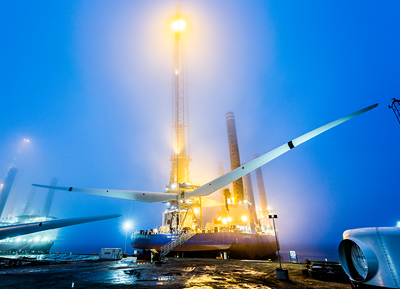 The first of a total of 160 wind turbines was successfully installed at the offshore wind farm Gwynt y Môr (Welsh for “wind of the sea”).

The wind turbine from Siemens was installed on a monopile foundation approximately twelve kilometres off the coast of North Wales.

The installation of each wind turbine comprising two tower segments, a nacelle, a hub and three blades will take around 24 hours, under favourable weather conditions.

The base port for the installation of the wind turbines is the Port of Mostyn in the Welsh county of Flintshire.

From here, the installation vessel transports three complete system sets to the construction site at sea.

Each of the 3.6MW systems weighs over 430 tons. Mostyn will also be the port of operation for Gwynt y Môr after completion of the wind farm.

From here, RWE already controls the operation of the two nearby wind farms Rhyl Flats (90MW) and North Hoyle (60MW).

Paul Cowling, Director of Offshore Wind at RWE Innogy: “We are making excellent progress with the construction of Gwynt y Môr Wind Farm. In the past few months we have installed more than half of the foundations, two substations and buried two of the four export cables. Now, the next and crucial phase is beginning: the installation of the actual wind turbines. We plan to have all 160 wind turbines installed and connected to the grid in 2014. With a total output of 576 megawatts, we are currently building one of Europe’s largest offshore wind farms.”

Gwynt y Môr wind farm is being built over an area of around 80 square kilometres approximately 12 kilometres off the coast of North Wales. The water depth in the construction site is 12 to 28 metres. There are currently five large installation vessels and many additional smaller vessels working on site. In parallel with the installation of the foundations and turbines, the cables between the turbines and to the shore are being laid. The power generated by the wind turbines will initially be routed through the two substations at sea and from there fed via export cable to the feed point on land near Pensarn. From here, the power will travel via eleven kilometres of underground land cables to the substation near St Asaph, where it will be fed into the National Grid. First Power production is scheduled to begin this summer.

RWE is pushing ahead the extension of renewable energy across Europe with a strong focus on onshore and offshore wind. The company currently operates wind farms with an output of around 2,200 megawatts throughout Europe. At present, RWE Innogy is expanding offshore wind energy in Germany, Great Britain and Belgium. Some 680 megawatts are currently under construction. In addition to Gwynt y Môr, this also includes the Nordsee Ost project in the German North Sea off Helgoland which is also planned to go into operation in 2014.