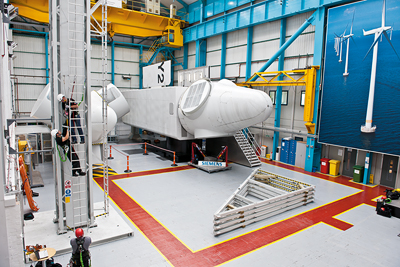 The Sere project is a flagship project for the customer ESKOM, which is one of the world’s largest utilities. The scope of supply includes the delivery and installation of 46 wind turbines of the type SWT-2.3-108, with an output of 2.3 Megawatts (MW), a rotor diameter of 108 meter on 115 meter towers each.

The deal also includes a five-year-service agreement. Installation of the wind turbines is scheduled to begin in the second half of 2013, with the start of operations expected during first half of 2014.

“South Africa has outstanding conditions for the utilization of wind energy and has set up a remarkable renewable energy program with the Independent Power Producer Procurement Program. We are proud to contribute to the development of wind power in South Africa with our technology, and especially proud that ESKOM has chosen to rely on us for their first large project,” said Felix Ferlemann, CEO of the Wind Power Division in Siemens Energy. The first wind power order from South Africa was awarded to Siemens by Mainstream Renewable Power Limited, Globeleq, and local B-BBEE investors Thebe Investments, Enzani and Usizo for the Jeffrey’s Bay onshore wind power plant with a total capacity of 138 MW.