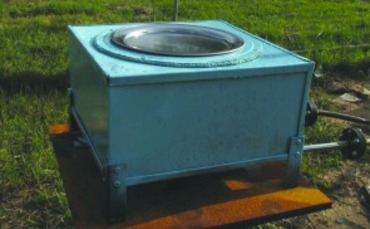 UK scientists have developed a solar-powered cooker that could help provide food and clean drinking water for isolated rural communities in the developing world.

As well as heating food, the cooker is able to store heat and can generate electricity for charging mobile phones and powering air conditioning units.

The cooker works by using a micro-version of concentrating solar power (CSP) – a system of mirrored strips tilted at different angles that focuses sunlight onto an absorber, which then converts the solar energy into useable heat.

Dr Chris Sansom of Cranfield University, which developed the cooker alongside COMSATS Institute of Information Technology in Islamabad, said many thousands of people are at risk of illness every day because of their inability to heat food or purify drinking water effectively.

“This is a very exciting project as there are many areas of the world where solar cookers and water purifiers could impact significantly on people’s quality of life,” he added.

Solar energy technologies are increasingly being seen as a way of bringing power to the estimated 1.6 billion people currently living without mains electricity, many of whom currently rely on dangerous, expensive, and polluting diesel or kerosene generators.